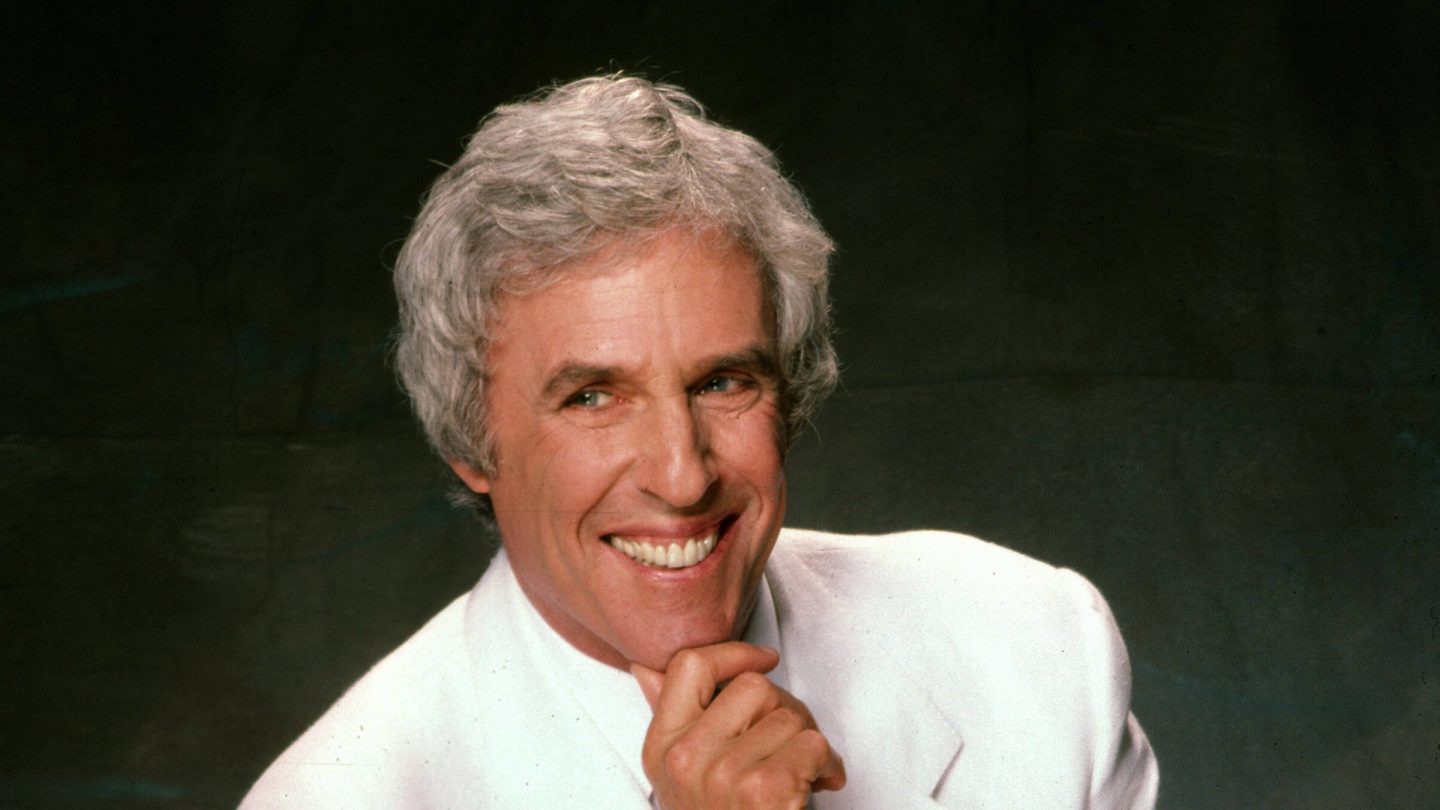 One of the most important composers of popular music in the second half of the 20th century, Burt Bacharach’s sophisticated yet breezy creations borrow from cool jazz, soul, Brazilian bossa nova, and traditional pop. After having his first Top 20 hit in 1957 with “The Story of My Life,” performed by Marty Robbins, his lush, poignant songs virtually defined and ultimately transcended the Brill Building pop of the 1960s. Bacharach went on to appear on the Billboard Hot 100 chart over 80 times, the vast majority of which were the product of his long-running partnership with lyricist Hal David. Together, they reached the Top Five with tracks like “Magic Moments” (Perry Como, 1958), “Only Love Can Break a Heart” (Gene Pitney, 1962), “I Say a Little Prayer” (Dionne Warwick, 1967), and “Raindrops Keep Fallin’ on My Head” (B.J. Thomas) from the soundtrack to 1969’s Butch Cassidy and the Sundance Kid. Bacharach’s work on that film resulted in two Academy Awards: best song and best score. In the ’80s, he teamed up with Carole Bayer Sager for a run of successful songs that included the number ones “Arthur’s Theme” (Christopher Cross, 1981, also with Peter Allen), and “On My Own” (Patti Labelle and Michael McDonald, 1986). “Arthur’s Theme” won Bacharach a third Oscar. In 1998, the album Painted from Memory, a collaboration with Elvis Costello, launched another recurring partnership. Some of Bacharach’s other writing partners over the years included the likes of Bob Hilliard and Paul Anka. Nearly 50 years after his first hit, he wrote his own lyrics for the first time for his Grammy-winning solo album At This Time, released in 2005. In 2011, the Library of Congress awarded Bacharach and David the Gershwin Prize for Popular Song. Still writing and recording in his nineties, he delivered Blue Umbrella, an EP with singer/songwriter Daniel Tashian, in 2020.

Born May 12, 1928 in Kansas City, Bacharach studied cello, drums, and piano as a child, and was later transplanted to New York City by his father, a syndicated columnist. The time spent in New York gave him a chance to sneak into clubs to watch his bebop heroes Dizzy Gillespie and Charlie Parker; he also played in several jazz bands during the 1940s. Bacharach studied music theory and composition at the Mannes School in New York, at Berkshire Music Center, at the New School for Social Research (with Darius Milhaud), at Montreal’s McGill University, and at the Music Academy of the West in Santa Barbara, California. A period in the Army interrupted his music study, but even while serving in Germany, Bacharach arranged and played piano for a dance band. He also performed in nightclubs and backed Steve Lawrence, the Ames Brothers, and Paula Stewart. Bacharach was discharged in 1952, and he married Stewart on December 22 of the following year.

On returning to the U.S., he began writing songs for Lawrence, Patti Page, the Ames Brothers, and others, but his first hit came from Marty Robbins in late 1957 when Robbins took “The Story of My Life” to the American Top 20 and the number one spot in England. The single was also notable for its co-writer, Hal David, who became Bacharach’s songwriting partner and collaborated on most of his big hits. The Bacharach/David team followed up in January 1958 with Perry Como’s “Magic Moments,” another U.K. chart-topper and a Top Five entry in the States. Bacharach’s marriage dissolved in 1958, and he left for Europe to tour with Marlene Dietrich. Upon returning in 1961, he wrote several songs for the Drifters with Bob Hilliard (including “Mexican Divorce” and “Please Stay”) before reuniting with Hal David. At an arranging session, he found the singer who became the ultimate vehicle for his songs: Dionne Warwick, who was working as a member of the Drifters’ backup vocal group, the Gospelaires.

By late 1962, Bacharach and David began focusing most of their composing energy on Warwick, who was the recipient of 15 Top 40 singles from 1962 to 1968 (including the Top Tens “Anyone Who Had a Heart,” “Walk on By,” “Message to Michael,” “I Say a Little Prayer,” “Valley of the Dolls,” and “Do You Know the Way to San Jose?”). The duo also remained dominant in England, where Frankie Vaughan, Cilla Black, Sandie Shaw, the Walker Brothers, and Herb Alpert all hit number one with Bacharach/David compositions. In 1965, Bacharach wed actress Angie Dickinson and reached number four on the U.K. singles chart with his own performance of “Trains and Boats and Planes.” He went on to release several popular solo albums, including 1967’s Reach Out and 1969’s Make It Easy on Yourself. As if his schedule weren’t busy enough throughout the ’60s, Bacharach contributed film scores for movies including What’s New Pussycat? (1965), Casino Royale (1967), and Butch Cassidy and the Sundance Kid (1969). The latter won Bacharach Academy Awards for Best Original Score and, with David, Best Original Song for “Raindrops Keep Fallin’ on My Head.” In the late ’60s, the pair also wrote the songs for the Neil Simon Broadway musical Promises, Promises. During its three-year Broadway run, it won the Grammy Award for Best Musical Theatre Album, and Bacharach hit the Hot 100 under his own name with the show’s “I’ll Never Fall in Love Again” in 1969.

The next decade looked bright for Burt Bacharach at the outset, as the Carpenters took “(They Long to Be) Close to You” to number one in the U.S. in July 1970. A year later, he landed in the Billboard 200 Top 20 with an eponymous 1971 album featuring his renditions of previous hit compositions. Soon after, however, legal disputes surrounding the musical film Lost Horizon (1973) ended Bacharach’s working relationship with both Hal David and — temporarily — Dionne Warwick. His subsequent albums proved commercially disappointing, and in 1980, he and Dickinson divorced.

Finally, following a minor 1980 hit for Jackie DeShannon (“I Don’t Need You Anymore,” which he penned with Paul Anka), Bacharach collaborated with Christopher Cross, Carole Bayer Sager, and Peter Allen on the Oscar-winning “Arthur’s Theme (Best That You Can Do).” Released in August of 1981, it became Bacharach’s first song to top the Billboard Hot 100 since “Raindrops Keep Fallin’ on My Head.” He married Bayer Sager just one year later, and together they wrote Roberta Flack’s Top 20 hit “Making Love” as well as “Heartlight,” which Neil Diamond took to number five.

Once Bacharach resumed composing, he began to hit, and 1986 was one of his finest years, with two more U.S. number ones: “That’s What Friends Are For” (by an all-star group including Dionne Warwick, Elton John, Gladys Knight, and Stevie Wonder) and a duet by Patti LaBelle and Michael McDonald titled “On My Own.” He divorced Bayer Sager in 1991 but worked with Warwick again two years later, on “Sunny Weather Love” from her Friends Can Be Lovers album. Also in 1993, Bacharach provided songs to James Ingram, Earth, Wind & Fire, and Tevin Campbell. Around the same time, many alternative bands began name-checking the hitmaker as an influence, and Oasis’ Noel Gallagher joined him on the stage of the Royal Albert Hall in addition to including a picture of him on the cover of Oasis’ Definitely Maybe (1994). BBC TV focused on Bacharach in a January 1996 documentary, and a three-disc retrospective of his compositions was released by Rhino in 1998. That same year, he collaborated with Elvis Costello on the acclaimed Painted from Memory album, and was celebrated at an all-star concert at Radio City Music Hall which later formed the basis for the LP One Amazing Night (1998).
In 2000, Bacharach composed the score for the box office flop Isn’t She Great before returning with his own studio album, 2005’s At This Time. It found Bacharach writing lyrics for the first time. Tonio K helped with the lyrics, and Elvis Costello, Dr. Dre, Chris Botti, and Rufus Wainwright also contributed to the album. Live at the Sydney Opera House with the Sydney Symphony Orchestra appeared in 2008, the year Bacharach celebrated his 80th birthday.

In 2011, he and Hal David were awarded the Gershwin Prize for Popular Song, and in 2016, Bacharach returned with music for the independent film A Boy Called Po. Elvis Costello’s 2018 full-length Look Now featured three songs written with Bacharach. The latter then collaborated with Daniel Tashian on the five-track Blue Umbrella EP, which arrived in 2020. ~ John Bush & Marcy Donelson