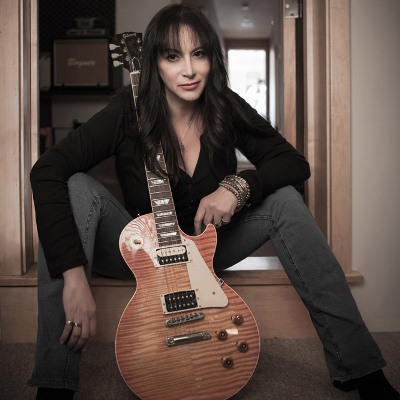 Songwriter Holly Knight is embarking on her fifth decade of music industry success with three of her songs featuring in Tina: Tina Turner Musical opening this week on Broadway.

She is also the writer of “Love Is A Battlefield,” the signature song for 2020 Rock and Roll Hall of Fame nominee Pat Benatar. And she has her own stage musical as well as her memoirs on the way.

A vital force behind the sound of some of rock’s most powerful female artists, Holly Knight’s iconic musical imprint is woven into the very fabric of the MTV generation. Her songs have withstood the test of time, remaining firmly entrenched even in today’s pop culture. She is one of only a handful of women inducted into the Songwriters Hall of Fame, and her songwriting has earned numerous awards for herself and the artists who have recorded her songs, including three Grammys in the Rock Vocal Performance category and thirteen ASCAP Awards. Songs she has written and co-written have appeared on records totaling more than 300 million in record sales.

Knight’s wild ride in the music business began when she joined the band Spider during the early 1980s as their keyboardist. (Her early training began at age four when she studied classical piano). From the start, her songs were targeted as the band’s singles for radio. Six months after she wrote “Better Be Good To Me” for Spider’s second album, Tina Turner, who had left Ike and reclaimed her dignity and independence, heard the song in a playback meeting and said. ”I have to record this tune.”

“Better Be Good To Me” captured the empowering message of a woman who had had enough. It was the second single on the multi-platinum 1984 album Private Dancer, Knight’s song winning Turner the Grammy for Best Female Rock Performance. After leaving New York and Spider to move to Los Angeles and pursue a full-time career in songwriting, Knight wrote: “Love Is A Battlefield” and “Invincible,” both top ten hits for Pat Benatar, another feisty female rock singer. Knight’s meteoric rise continued as she wrote one chart-topping hit after another. For newcomer Patty Smyth, she wrote the anthemic “The Warrior” and John Waite recorded her song “Change”.

The success spurred her on; what followed was the top-five single, “Never” for Heart and “Pleasure And Pain” for Divinyls. She continued writing for Tina Turner, contributing nine songs to the international star’s repertoire, including “(Simply) The Best,” a song Tina has said she would like to be remembered for most of all.

Knight went on to write hits for Rod Stewart, Chaka Khan, Kiss, Aerosmith, Cheap Trick, Bon Jovi, Hall and Oates and many more. Her songs have appeared in movies as varied as Mad Max Beyond Thunderdome, Thelma and Louise, Thirteen Going On Thirty, Anchorman ll, Dallas Buyers Club, The Other Woman, and have featured on TV shows including Saturday Night Live, The Tonight Show Starring Jimmy Fallon, The Oprah Winfrey Show, American Idol, The Voice, The Simpsons, South Park, Family Guy, 30 Rock and most recently on GLOW, Stranger Things and Mixed-ish.

Proving that her songs are timeless and still sought after, the song “Baby Me,” which Knight wrote for Chaka Khan with another songwriting legend, Billy Steinberg, is being sampled in a new song by rapper G-Eazy. Actor Luke Evans has recently recorded a cover of “Love Is A Battlefield.”

Not one to sit back on her laurels, Knight is still as passionate and driven about music as she was in her late teens. Thriving on diversity, it’s her ability to move from one genre to the next that has given her this 40-year career in music.

As the eagerly awaited Tina: The Tina Turner Musical lands at the Lunt-Fontanne Theatre on Broadway and continues its stunningly successful run in London’s West End, Knight is busy creating on her own show, I Am The Warrior, an empowering coming of age rock musical celebrating the female spirit, which will include her best-known hits and new original songs.

Both her stage musical and her memoirs tell the story of rock and roll survival, written by a pioneering woman songwriter and producer whose stories, wild and true, are only matched in number by her amazing catalog of songs.