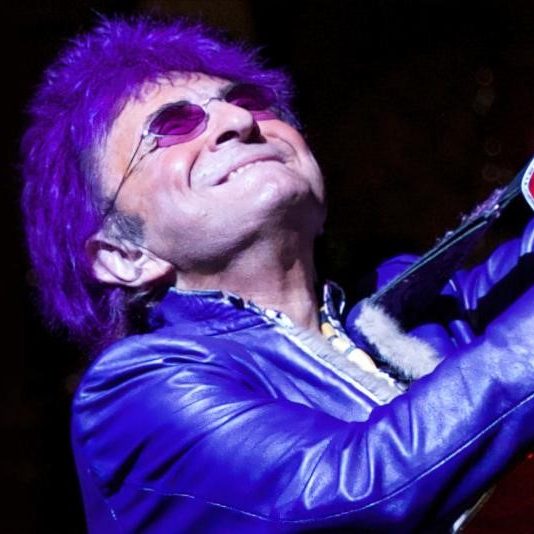 Jim Peterik is a survivor. Those words were prophetically spoken first on the back of his first solo album “Don’t Fight The Feeling” back in the seventies. In the decades since, Jim has lived up to that term.

Jim’s home base has always been The Ides Of March, where Jim wrote and sang the evergreen hit “Vehicle”. The Ides began their journey in 1964, and continue today as a vital, touring act; featuring all the original members.  In the seventies, Jim combined his love for melody and driving rock with the band Survivor.  Their phenomenal rise to the top was borne on the back of the amazing songs Jim co-wrote. “The Eye Of The Tiger” from the film “Rocky III” has become an indelible classic, and garnered Jim Grammy™ and People’s Choice awards; as well as an Oscar™ nomination. Other Billboard chart-toppers followed, including “The Search Is Over”, “High On You, and “I Can’t Hold Back”. Further hits from films followed. “Burning Heart” from “Rocky IV” topped the charts; and Jim co-wrote the theme of the seminal animation classic “Heavy Metal” with Sammy Hagar.

A long lasting and fruitful relationship started in 1980 between Jim and the southern-rock group .38 Special. Jim co-wrote their platinum hits “Hold On Loosely”, “Caught Up In You”, “Wild-Eyed Southern Boys”, “Fantasy Girl”, and “Rockin’ Into The Night”. Their collaboration continues to this day. Jim has also written with the beloved Lynyrd Skynyrd.

The turn of the century saw the genesis of World Stage, an ongoing project bringing Jim and artists with whom he has had a history as either co-writer or touring, for live shows and recordings. The World Stage shows also showcases fresh talent Jim mentors. The new World Stage album “Winds Of Change” will be released worldwide on Frontiers Records in April 2019. The first video “Proof Of Heaven” with special guest Dennis DeYoung will premiere in March 2019.

Jim Peterik has never lost his verve for Melodic Rock, a style of music he helped forge. His group Pride Of Lions tours the European continent regularly, and their albums and DVDs are best sellers. The latest Pride Of Lions album “Fearless” was released on Frontiers Records in 2016.

Expanding (but not too far) from the musical realm in 2002, Jim co-authored “Songwriting For Dummies” This book distilled a lifetime of successful songwriting into simple language, and shed light on some of the arcane wisdom of writing songs. In the years since the Book has achieved Best Seller status and has recently gone into its second printing, with a major update.

In September of 2014, Jim’s Autobiography “Through The Eye Of The Tiger” was released. The book traces Jim’s path from humble beginnings in Suburban Chicago to his stellar career as a platinum hit Songwriter, successful Musician and in-demand Producer.

A lifelong Beach Boys fan, Jim fulfilled a career dream in 2012 co-writing “That’s Why God Made The Radio” for the California legends. The single turned out to be the highest charting single of their career.

On October 16th 2015 (the 50th Anniversary of the Ides Of March) Jim hosted American Garage-The Cornerstones Of Rock, a Public Television concert featuring the Ides Of March and other essential Chicago rock groups. The special garnered the highest ever pledges for WTTW, (Chicago’s PBS station), with Jim co-hosting the pledge breaks. The live concerts highlighting the “Cornerstones” cast continue to sell out whenever and wherever they are mounted.

In 2016 Jim released “The Songs”, taking his top hits to Nashville in an entirely new light, working with some of Music City’s greatest. The accompanying shows sold out in a hurry.

2018 saw the launch of the “Eye Of The Tiger” energy bar, in conjunction with the Jimmy Bar company; co-formulated by Jim Peterik. The bar can be found at major retailers nationwide.

The future continues in overdrive for Jim. The Ides Of March will release a new album entitled “Play On” in 2019, with an impressive lineup of guest artists, celebrating 55 years together. The Ides continue to thrill audiences everywhere with their hit-packed shows (featuring the platinum gems Jim wrote or co-wrote). Jim remains a high demand writer, producer, and solo performer traveling worldwide; with diverse projects always in the pipeline.