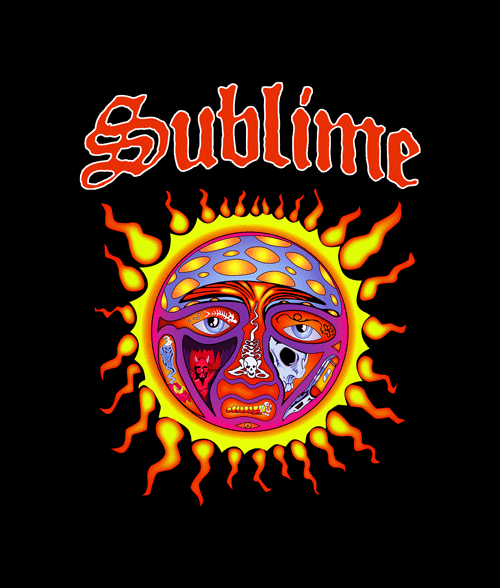 Drummer Bud Gaugh and bassist Eric Wilson had grown up together as friends in the same neighborhood in Long Beach, in fact, it was Wilson’s father Billy who taught Gaugh to read music and play drums. The two friends bashed around in local garage bands, eventually forming a three-piece punk band in high school with friend Brian Seidman called The Juice Bros. (Seidman would later go on to manage Sublime). Eventually the band met another Long Beach native, Brad Nowell, and he joined on guitar and vocals, eventually replacing Seidman. The band expanded it’s sound from just straight punk rock to more of a ska-punk sound and changed their name to Sublime. All three of the band members were not only musicians, but also surfers and skateboarders and all-around party guys and were well known in their local scene. Their first gig was on the 4th of July, 1988 at a small club in Long Beach, and the gig was so crowded and raucous that it sparked what became known as the “Peninsula Riot”, in which seven people were arrested. For the next several years, the band played around Long Beach and Southern California, playing at clubs and back-yard beer parties, building up a fan base and sharing bills with mostly punk bands and the so-called “Third Wave” ska bands that were emerging at the time, including No Doubt. During this time, Nowell was also a student at Cal State Long Beach, taking classes in music and recording with his friend Michael “Miguel” Happoldt, who played in another Long Beach band, The Ziggens. The Ziggens often opened for Sublime at shows on campus and in the local area, and after Sublime became the most popular band on campus, the pair decided to record some demos by their respective bands and release cassette versions of the songs on their own home-made label, Skunk Records. The bands sold the releases at gigs and local record stores, the best known of these called Jah Won’t Pay The Bills, which included tracks that would appear again on later releases.

By 1991, Sublime had established their unique blend of punk, ska, reggae and hip-hop and were playing to more and bigger crowds. The band wanted to tour nationally, but prior to this Gaugh quit music temporarily and entered a rehabilitation program to get himself off of drugs. The band decided to carry on and record a CD with drummer Kelly Vargas sitting in for Gaugh. The result was the band’s debut album, 1992’s 40 Oz. To Freedom, released on their own Skunk Records and sold out of the back of Nowell’s car at gigs and at local independent record stores. The album ended up selling over 60, 000 copies and eventually attracted the attention of local alternative rock powerhouse station KROQ, who started featuring a track off of the album, “Date Rape”, in their regular rotation. With the song becoming a regional hit, the band attracted the attention of A&R representatives from the major labels, in particular Jon Phillips from Gasoline Alley/MCA, and the band was signed to the label in 1994. Phillips went on to be the band’s manager and later started the Silverback Management company that managed the careers of the post-Sublime Long Beach Dub All-Stars and Slightly Stoopid. Slightly Stoopid, like The Ziggens, was another band from Long Beach that had been a part of the early Skunk Records roster. With Gaugh back in the band and 40 Oz. To Freedom being distributed by a major label, the band hit the road extensively in 1994 and 1995, supporting the album and causing “Date Rape” to be added to alternative rock playlists across the country. Before the band left on tour, interest was shown in the band by Epitaph records founder and owner Brett Gurewitz, and the band recorded a series of demos at the Epitaph studios, including a duet with No Doubt singer Gwen Stefani, (an old friend from playing the punk and ska circuit in Southern California). Epitaph ended up not signing the band and the group ended up with six new songs that they were free to release, but the band felt putting out a CD with just six songs would be ripping off their fans, so they used their trusty four-track recorder and recorded 13 more mainly acoustic songs and compiled them together for the Robbin’ The Hood (MCA) album, released in 1994. While out on tour, the band quickly gained a reputation for drunken, raucous shows, that could turn out to be wildly entertaining or a drag, depending usually on how inebriated Nowell got before and during the show. Videos of shows during this period show Nowell so drunk that he can’t play guitar and can barely sing or stand up.

Regardless, Sublime was asked to be a co-headliner on the inaugural nationwide Vans Warped Tour in 1995. Sublime turned out to be one of the most popular bands on the tour, but their rampant alcohol and drug use led to tension with the management of the tour. Not helping matters, Gaugh was arrested several times during the tour for possession of marijuana and the band insisted on bringing their dogs on stage with them while they played, including Nowell’s infamous Dalmation, Loudog, a practice that ended up in members of the audience getting bit. The band was actually kicked off of the Warped Tour for a time, but the audience demanded that they be reinstated and they were eventually put back on the tour. After completing their Warped obligations, the group embarked on another tour, called the Three Ring Circus Tour, and then were told that they needed to produce a new studio album to follow up the success of 40 Oz. To Freedom.

In early 1996, Sublime started work on a new album. Though alcohol and drug abuse had always been an issue in the band, sometime in 1994 Nowell started using heroin, and by the time the band was recording it’s new album, his habit was full-blown. This was sad not only for Nowell and his bandmates, but also during 1994, Nowell had met Troy Den Dekker. The two fell in love and Dekker became pregnant in September of 1994. Nowell and Dekker’s son Jakob James Nowell was born in June of 1995. Reportedly, Nowell tried to clean himself up on numerous occasions and quit his addictions for the sake of his family, but was unable to stick to it. The new album was recorded in both Texas, with producer Paul Leary from the Butthole Surfers, and Los Angeles with producer David Kahne. Both producers complained of all the drug use surrounding the band, but sessions were almost done when Sublime decided to return to California to play a series of shows to preview their new material for their fans. While back in California, Nowell and Dekker married each other on May 18th, 1996. After playing a show on May 24th, Nowell called Dekker early in the morning from his hotel room in San Francisco. Dekker sensed Nowell was using heroin again, but when asked, he said he wasn’t. Later that morning, when the band went to wake Nowell to leave and get back on the road again, he was found lying on the floor, dead of a heroin overdose. Nowell’s dog, Loudog, ran over to his master and licked his face, but Nowell was already dead. Though the band and it’s associates and family knew about Nowell’s drug problems, the death still came as a huge surprise and shock. Gaugh and Wilson were faced with the question; should they finish the tracks and put out the album, or should they lock the sessions away? The pair decided to finish the songs, and their self-titled album Sublime (MCA) was released in July of 1996. Probably because the band had built up a large following, but undoubtedly also because of Nowell’s tragic death, the album was a huge success, spawning the hit single “What I Got”, which crossed over into mainstream hit radio. The success the band had finally achieved was at the most bittersweet for Wilson and Gaugh. After so much work, the pair were left without their singer, guitarist and main songwriter. At the peak of their success, Sublime was for all intent and purposes, no more

Several posthumous releases were released in the following years, including Second-hand Smoke (MCA)(1997), a collection of unreleased material and remixes of older songs, the live document Stand By Your Van (MCA)(1998), a mostly acoustic collection of songs performed by Sublime and Nowell solo called Sublime Acoustic: Bradley Nowell & Friends (MCA)(1998),(whose artwork was made to look like a CD-R that the band had made), and finally their Greatest Hits (MCA) collection in 1999. A further box set of live recordings, demos and rarities, called Everything Under The Sun (Geffen) was released later in 2006. Bud Gaugh and Eric Wilson went on to form the Long Beach Dub Allstars, a loose group including Sublime associates Michael Happoldt, Todd Forman and “Field” Marshall Goodman. The band recorded two albums before disbanding in 2002. Gaugh went on to drum in the band Eyes Adrift, formed with Krist Novoselic from Nirvana and Curt Kirkwood from the Meat Puppets. Gaugh was also later in the band Volcano with Kirkwood and Happoldt.