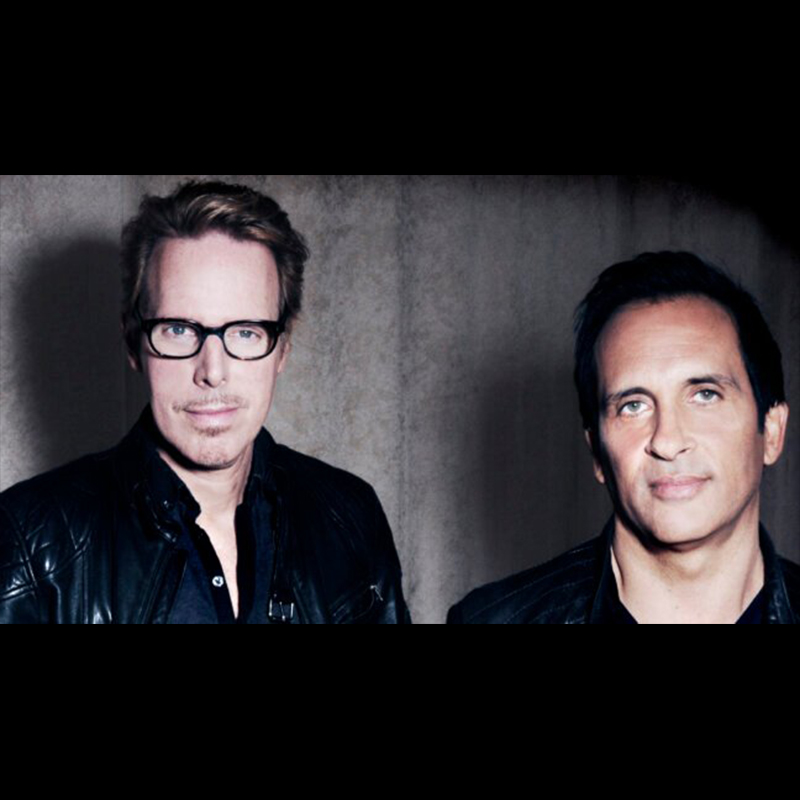 Carl Sturken and Evan Rogers are still on the musical journey that they began over 30 years ago, writing, producing and developing artists with the enthusiasm and acumen they’ve acquired over decades of success. The Grammy-nominated team’s mastery of many styles of music has resulted in more than 20 Top 40 hits, twelve Top 5 hits, and 6 BMI awards. Starting their careers in the NYC R&B scene of the early 80’s, they worked on the legendary Beat Street soundtrack and began to gain a reputation by producing such artists as Cheryl Lynn, Stephanie Mills and Jennifer Holiday. They then crossed over to the pop world by engineering the comeback of Donny Osmond, with the top 5 smash “Soldier of Love “. In 1991 they became artists themselves, and as Rhythm Syndicate they scored a #1 hit, “P.A.S.S.I.O.N.”, as well as a Top 10 follow-up with “Hey Donna”. After two years of touring and promotion, Sturken & Rogers disbanded the group to resume writing and producing full-time. Success came next in the U.K. with the Top 5 hit “Power of a Woman” for Eternal. More work overseas followed, including contributions to the Brand New Heavies platinum album Shelter, as well as writing and producing songs for Boyzone’s 5X platinum album Where We Belong. In 1997, they shifted attention stateside with the mega-hit “God Must Have Spent a Little More Time on You” for N’Sync, which also became a top 5 smash on the country charts when the supergroup Alabama covered it. The team also wrote and produced several songs for Christina Aguilera’s debut album, which entered the Billboard charts at #1 and went double platinum in just three weeks. They also branched out into the smooth jazz world, working with Dave Koz on eight albums over the last 30 years, including singles featuring Luther Vandross and Brian McKnight. The duo also had songs on 98 Degrees’ double platinum album, Revelation and the multi-platinum debut albums of Jessica Simpson, Mandy Moore and Anastacia, as well as collaborations with such artists as Christina Milian and Emma “Baby Spice” Bunton.

As the 90s came to a close, Sturken & Rogers changed gears once again, discovering and developing Javier, whom they signed to Capitol Records, and who would later go on to win the first season of The Voice. Next to come calling was Clive Davis, who hired the team to work on Kelly Clarkson’s debut album, for which they wrote the hit single “The Trouble With Love Is”, which ended up being featured in the holiday perennial movie “ Love Actually “. The Davis connection continued with the American Idol project in 2004, as well as Ruben Studdard, and Rod Stewart’s Great American Song Book Vol. 11. The duo then decided to begin developing their own artists in earnest, forming Syndicated Rhythm Productions in 2005. Their first signing was 16-year-old Robyn Rihanna Fenty, whom Rogers discovered while visiting his wife’s family in Barbados. They brought her to Jay-Z and L.A. Reid at Def Jam, and she was signed within hours of her audition. Rihanna’s first single “Pon De Replay”, co-penned and produced by Sturken and Rogers, went on to be a worldwide smash, and she has gone on to become one the most successful music artists of all time, selling over 250 million albums worldwide, as well as 14 number-ones and 31 top-ten singles in the U.S. alone.

The SRP artist roster continued to grow during this time; next up was Shontelle, who they brought to Steve Rifkind’s SRC/Universal Motown label, resulting in two platinum singles. Sturken and Rogers continued writing and producing for artists outside of their own stable, and with their song “Issues” they scored yet another top smash with U.K. girl group The Saturdays. They also co-wrote the song “Gypsy” for Shakira, which was an international hit and earned them their 6th BMI award.

Never content to rest on their laurels, the duo decided to use their smarts and experience to sign and develop young songwriters, inking a deal with Donna Caseine for a joint venture with UMPG. First out of the gate was Brandon Hodge, aka BAM, who has racked up hits with Mary J. Blige, Chris Brown and Usher. Next came the pop writing team Loote, who started out strong with Cheat Codes’ smash “No Promises” featuring Demi Lovato and have continued with cuts for Why Don’t We and Jennifer Lopez among many others.

During all of this time Sturken and Rogers were exploring yet another side of their musical world, by signing a brilliant young jazz pianist and singer, Kandace Springs, whom they discovered singing in a hotel lounge in Nashville, Tennessee. Flash forward six years, and Blue Note/Capitol recording artist Ms. Springs is now performing at sold out concert halls and festivals from Tokyo to Paris, having established herself as one of the jazz world’s brightest new talents.

2021 finds Sturken and Rogers doing pretty much what they’ve been doing for the last 35 years – writing hit songs and finding and developing the next generation of singers and writers. The last chapter of their story appears to still be many chapters away.