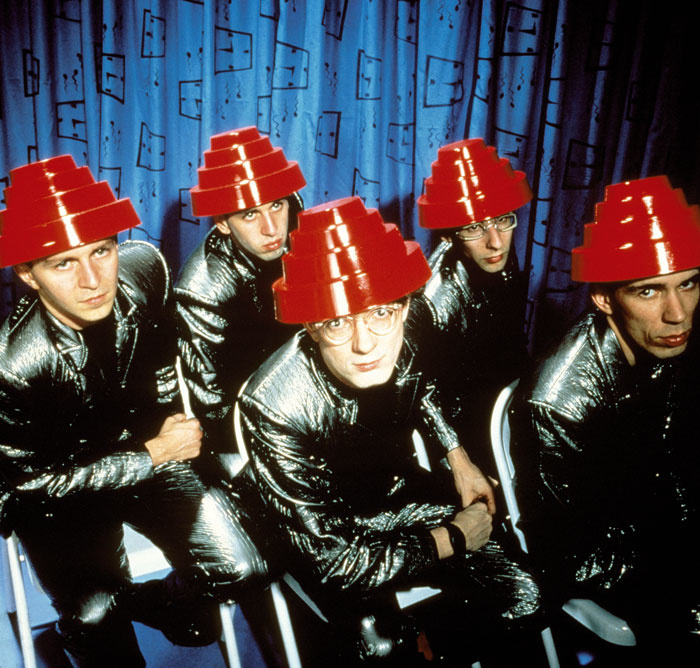 Others found DEVO’s sound, imagery, and material threatening; Rolling Stone, for example, called the group fascists. But such criticism missed the point: DEVO dramatized conformity, emotional repression, and dehumanization in order to attack them, not to pay tribute to them.

While 1979’s Duty Now for the Future was another strong effort, the band broke through to the mainstream with 1980’s Freedom of Choice, which contained the platinum-selling hit single, “Whip It”, and represented a peak in their songwriting. The video for “Whip It” became an MTV smash, juxtaposing the band’s low-budget futuristic look against a down-home farm setting and hints of S&M.

DEVO’s next two albums, New Traditionalists and Oh NO It’s DEVO!continued their 1980’s decade world touring success accompanied by the hit songs, “Beautiful World” and “That’s Good” respectively. Shout was released in 1984, and Total Devo in 1988, followed by a live album titled Now It Can Be Told: DEVO Live at The Palace in 1989. After releasing a studio album entitled Smooth Noodle Maps in 1990 the band left the world of touring and recording to pursue film and TV projects.

During the 5 year hiatus the band released Hardcore Devo Volumes 1 and 2, early 70’s era compilations which showcased DEVO’s seminal, minimalist electronic rock recordings. Those mind bending works were followed by the release of a pair of double-disc DEVO anthologies: the first was the half-hits/half-rarities Pioneers Who Got Scalped: The Anthology (on Rhino), while the second was the limited-edition mail-order release Recombo DNA (on Rhino’s Handmade label), the latter of which was comprised solely of previously unreleased demos.

Meanwhile, Gerald Casale, who directed most of the band’s 20 music-videos, directed numerous music videos, most notably for Rush, the Foo Fighters, Soundgarden and Silverchair before moving on to a successful commercial directing career.

As DEVO’s legend grew and other bands acknowledged their influence (Nirvana covered “Turnaround,” while “Girl U Want” has been recorded by Soundgarden, Superchunk, and even Robert Palmer), their minimalistic electro-pop was finally given new exposure on four dates of the 1996 Lollapalooza tour, and six dates on the 1997 Lollapalooza tour, both to enthusiastic fan response.

Those legendary appearances lead to limited annual touring in the US, Europe, Australia and Japan along with conceptual projects such as a CD-ROM game (The Adventures of the Smart Patrol) with it’s accompanying music soundtrack and DEVO 2.0, a DVD project for Disney’s Hollywood records featuring CG animation composited with a teen-aged band playing DEVO’s hits. In 2006 the young DEV2.0 band successfully toured middle schools in the USA.

2006 turned out to be a pivotal year for the original DEVO as well. With Mark’s help, Gerald Casale wrote a song for his advertising agency friends at Mother NYC called “Watch Us Work It”. Mother placed the song in a national spot for Dell. The spot aired during the NFL play-offs and through to the Superbowl in 2007. The response was so huge the band released the song on itunes to spectacular fanfare and brisk sales. Industry tastemakers came knocking. Their persistence paid off as DEVO began collaborating on new songs for the first time in 18 years.

By 2009 DEVO had over 35 new songs and interest from their original label, Warner Brothers Records. DEVO decided to reverse course, abandoning their insular, secret world in favor of embracing all the modern techniques of marketing, focus groups, crowd sourcing and social media while simultaneously offering wry satire on that embrace. Together with WBR they hired Mother to run the decidedly edgy publicity and marketing for what would become their 9th studio recording, Something for Everybody. Songs and final mixes were chosen by fans as were DEVO’s new, blue Energy Dome color.

Many licensing deals followed for the group’s new songs including “Fresh”, “Human Rocket” and “Please Baby Please”. Then, in 2010, the group embarked on a year-long concert tour bringing a mix of old and new music wrapped in up-to-the-minute theatrics, light shows and video.

Currently the band is developing a musical based on their alternate world, Spudland, populated with such characters as Booji Boy, Dr. Byrthfood and the nefarious Rod Rooter as well as placing finishing touches on a darkly comic, “DEVO origins” feature film script. The band is confident that these major endeavors, when realized will show a new generation that de-evolution is real.