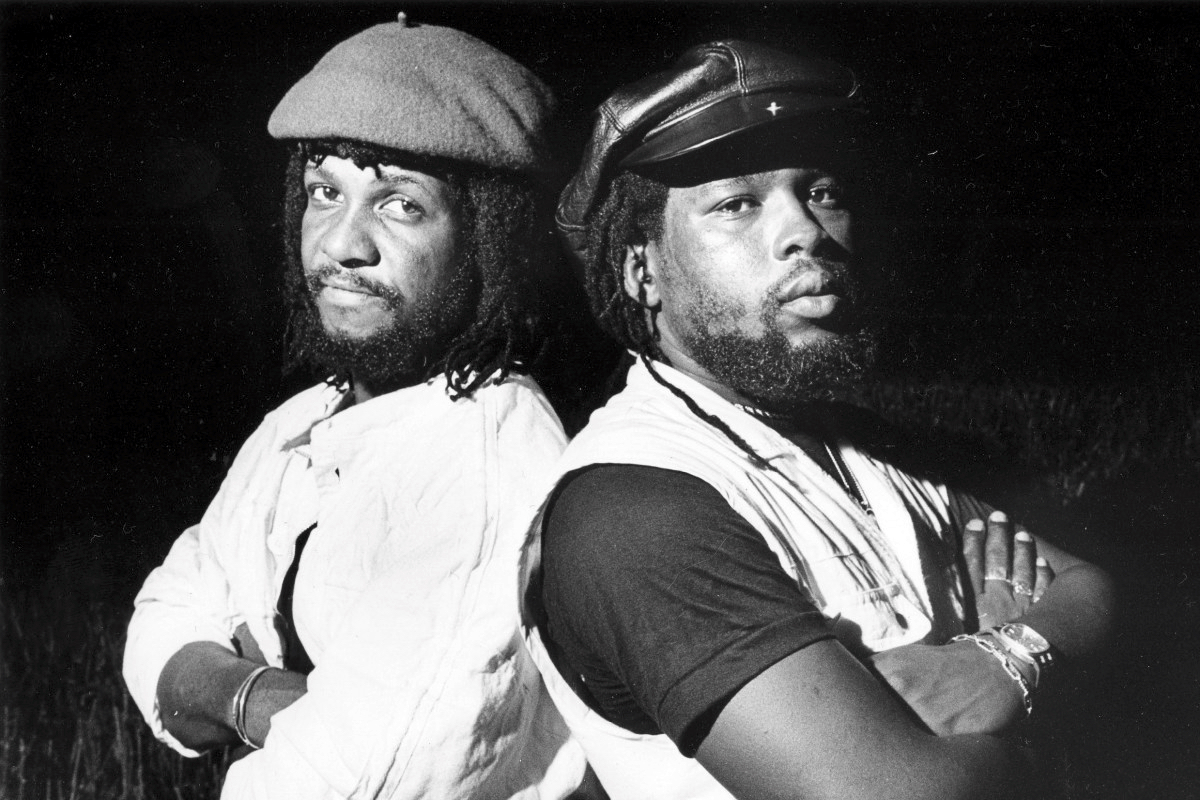 Sly Dunbar (Lowell Charles Dunbar, 10 May 1952, Kingston, Jamaica, West Indies; drums) and Robbie Shakespeare (b. 27 September 1953, Kingston, Jamaica, West Indies; bass) have probably played on more reggae records than the rest of Jamaica’s many session musicians put together. The pair began working together as a team in 1975 and they quickly became Jamaica’s leading, and most distinctive, rhythm section. They have played on numerous releases, including recordings by U-Roy, Peter Tosh, Bunny Wailer, Culture and Black Uhuru, while Dunbar also made several solo albums, all of which featured Shakespeare. They have constantly sought to push back the boundaries surrounding the music with their consistently inventive work.

Dunbar, nicknamed ‘Sly’ in honour of his fondness for Sly And The Family Stone, was an established figure in Skin Flesh And Bones when he met Shakespeare. Dunbar drummed his first session for Lee Perry as one of the Upsetters; the resulting ‘Night Doctor’ was a big hit both in Jamaica and the UK. He next moved to Skin Flesh And Bones, whose variations on the reggae-meets-disco/soul sound brought them a great deal of session work and a residency at Kingston’s Tit For Tat club. Sly was still searching for more, however, and he moved on to another session group in the mid-70s, the Revolutionaries. This move changed the course of reggae music through the group’s work at Joseph ‘Joe Joe’ Hookim’s Channel One Studio and their pioneering rockers sound. It was with the Revolutionaries that he teamed up with bass player Shakespeare, who had undergone a similar apprenticeship with session bands, notably Bunny Lee’s Aggrovators. The two formed a friendship that turned into a musical partnership that was to dominate reggae music throughout the remainder of the 70s and into the 80s.

Known simply as Sly And Robbie (and occasionally Drumbar And Basspeare), they not only formed their own label, Taxi, which produced many hit records for scores of well-known artists but also found time to do session work for just about every important name in reggae. They toured extensively as the powerhouse rhythm section for Black Uhuru and, as their fame spread outside of reggae circles, they worked with Grace Jones, Bob Dylan, Ian Dury and Joan Armatrading, among a host of other rock stars. In the early 80s, they were among the first to use the burgeoning ‘new technology’ to musical effect; they demonstrated that it could be used to its full advantage without compromising their musicianship in any way. In a genre controlled by producers and ‘this week’s star’, reggae musicians have rarely been accorded their proper respect, but the accolades heaped on Sly And Robbie have helped to redress the balance.

Sly And Robbie’s mastery of the digital genre, coupled with their abiding love of and respect for the music’s history, placed them at the forefront of Kingston’s producers of the early 90s. Their ‘Murder She Wrote’ cut for Chaka Demus And Pliers set the tone for 1992, while ‘Tease Me’ for the same duo, built around a sample from the Skatalites’ 60s hit, ‘Ball Of Fire’, was another significant UK chart success in 1993 – this was quite remarkable for a team whose successful career had already spanned three decades. They achieved further commercial (if not artistic) success with 1997’s celebrity-packed Friends, with guest singers including Maxi Priest, Ali Campbell (UB40) and Mick Hucknall (Simply Red) brought in to cover reggae standards. Hucknall’s bland cover version of Gregory Isaacs’ ‘Night Nurse’ reached the UK charts the same year. Sly And Robbie were one of the first artists to move with Chris Blackwell when he founded the Palm Pictures label in 1998. The following year they collaborated with leading producer Howie B. on Drum & Bass Strip To The Bone.