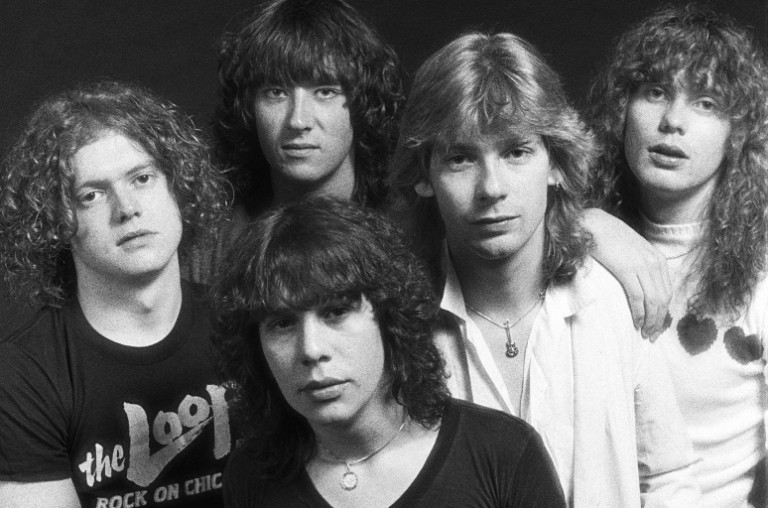 A new five-disc box set includes remasters of ‘On Through the Night’ and ‘High ‘n’ Dry.’

Best known for ’80s hard-rock fist-raisers such as “Rock of Ages” and “Pour Some Sugar on Me,” as well as pioneering hair metal ballads including “Hysteria” and “Love Bites,” Def Leppard is looking forward to playing their hits. The plan is to do it during the Stadium Tour with Motley Crue and guests Poison and Joan Jett & The Blackhearts, which the band hopes to launch June 18 in Jacksonville, Fla., at the TIAA Bank Field.

Right now, however, vocalist Joe Elliott and bassist Rick Savage are focusing on the just-released five-disc box set The Early Years 79-81 (Mercury, March 20), which displays a grittier, more metallic sound than Def Leppard’s most popular material. The band assembled the collection to celebrate the 40th anniversary of their major-label debut, 1980’s On Through the Night. In addition to featuring remasters of that album and 1981’s High ‘n’ Dry, the set includes the group’s first studio recording, alternate song takes, B-sides and live recordings.

“The bottom part of an Apollo rocket gets you off the ground and moves you into another stratosphere, but then it just pulls away and it’s gone,” says Elliott of the motivation for compiling The Early Years 79-81. “Music’s not like that because people can always go and revisit your history. So we dressed it all up in a physical box with a book and included things people never have heard before.”

The earliest material in the compilation are the three songs from 1979’s self-produced, self-released The Def Leppard E.P. that gave the band liftoff. Like many of the act’s releases, the EP wasn’t created as it was originally planned. A week before it was recorded at Fairview Studios in Hull, England, co-founder and drummer Tony Kenning stopped showing up at practice. He was fired, and local musician Frank Noon of The Next Band filled in for the afternoon session.

The next day, Def Leppard hired 15-year-old Rick Allen, who had replied to a newspaper ad the band had placed for a new drummer. “He came down to the rehearsal and blew us away with his technique and musicianship,” recalls Savage. “He was young, but he had been playing in bands since he was 10, and for many years, he was the most accomplished musician in the band.”

Def Leppard’s first step toward fame came in January 1979 when Elliott attended a University of Sheffield DJ event attended by BBC radio legend John Peel. Afterward, the singer sidled up to Peel and handed him the EP. “I asked him if he’d give it a listen, and he asked me to write my phone number on it,” says Elliott. “Soon after, he called me up and said, ‘OK, I’m playing it tonight.’ He played a song a night for five straight nights.”

Other DJs followed Peel’s lead, and a couple of BBC studio sessions (featured in the box set) later, Def Leppard was signed. At the end of 1979, the band entered Startling Studios in Ascot, England, with producer Tom Allom (Black Sabbath, Judas Priest). The group recorded 11 songs for On Through the Night, which was heavily influenced by Thin Lizzy, UFO and Aerosmith. Acting more like an engineer than a producer, Allom encouraged Def Leppard to be themselves and he would capture their energy. In retrospect, Elliott wished Allom had been less involved.

“Basically, On Through the Night was a diary entry of what we had been doing for the previous year,” says Elliott. “We got all of the backing tracks done in a day and then spent three weeks ruining the album with too many overdubs, leaving me three days to do all the vocals, which really wasn’t enough time.”

Nonetheless, On Through the Night charted at No. 15 in the United Kingdom, and the metal press championed the band, crowning it a leader of the new wave of British heavy metal along with Iron Maiden, Saxon and Tygers of Pan Tang. While Def Leppard enjoyed the adulation, they never liked being categorized.

“We didn’t agree that our music was anything like Iron Maiden’s,” explains Savage. “And it became a little tiresome because everyone wanted to talk about that all the time when we didn’t feel like we fit the category.”

Def Leppard also seemed to set its sights on the North American market. The band embarked on a 10-week U.S. tour opening for the Pat Travers Band and Judas Priest, which miffed some British fans. On Through the Night’s euphoric track “Hello America” didn’t help dissuade those who accused Def Leppard of being turncoats, either. When the band took the stage at the Reading Festival in August 1980, they were greeted with boos and projectiles.

“Within 20 seconds of us starting to play, this can of beer went flying through the air, hit my guitar strap and splashed all over,” recalls Savage. “I was lucky I was only hit by beer because some people were throwing bottles of piss.”

When Def Leppard announced Robert John “Mutt” Lange would produce the next record, fans were intrigued because Lange had worked miracles for AC/DC, Foreigner and others. The band also was enthused, but pre-production was delayed after Lange’s sessions for Foreigner’s 1981 classic 4 ran long and Def Leppard was financially strapped.

“It should have been a great time for us, but it was actually depressing,” says Elliott. “In the winter of ’80, I had to work for my girlfriend’s father hauling bricks at a building site in Sheffield because we couldn’t afford to live on the paltry retainer from the record company.”

While waiting to enter the studio, the band reworked such old songs as the midtempo “Lady Strange” and wrote a batch of new ones, including “Bringing on the Heartbreak.” Originally, the latter track was slow and dreary — far from the breakthrough power ballad it later became. “When we wrote it, it was cold and overcast, and we were at a factory in Dronfield, which is where Rick’s mom used to work,” says Elliott. “At the time, it was just another song. We never imagined it would become this big thing.”

In February 1981, Def Leppard finally started working with Lange. Like its predecessor, High ‘n’ Dry was rooted in bluesy English hard rock, but the influence of AC/DC (with whom Lange had recently worked) was evident in the jagged riffing and howling vocals. But being subjected to Lange’s perfectionist work ethic and exacting standards was a real wakeup call.

“It was full-on boot camp, which was insanely difficult for us because the environment wasn’t very rock’n’roll,” says Elliott. “We had to listen to him and follow his lead to get the record done. We were like headless chickens going, ‘Yes, sir; no, sir; three bags full, sir.’ ”

“Mutt came in and took the songs completely apart,” adds Savage. “He literally became the sixth member of the band in every sense, from helping with the songwriting to working on the arrangements and, obviously, the production.”

Lange was especially hard on Elliott, who was forced to sing parts repeatedly until he got them right or his throat was too sore to continue. “In the end, he did a great job with my vocals, but it was a struggle. [Drumsticks] got thrown and [drinking] glasses got thrown. Language got thrown all the time: ‘F–k you. I ain’t doing this s–t.’ I’d walk out, but then I’d always end up coming back a couple hours later. Big hugs and then, ‘OK, let’s get on with it.’ ”

High ‘n’ Dry arrived on both sides of the pond in July 1981 to universal acclaim. It reached No. 26 and No. 38 in the United Kingdom and the United States, respectively, thanks in part to the video for “Bringing on the Heartbreak” receiving regular MTV airplay. In December 1982, the album went gold in North America, then platinum in November 1983. Its success boosted sales of the now-platinum On Through the Night to gold in November 1983.

From June to December 1981, Def Leppard opened for Judas Priest, Ozzy Osbourne, Rainbow and Blackfoot, and headlined their own shows between major tours. Having a hit video drew more young women, and before the band members could say “groupie,” they were having the time of their lives. “As a kid in Sheffield, I couldn’t get a date to save my life,” says Elliott. “But as soon as you’re in a successful band, you don’t have to try.”

Some members were partying harder than others, and original guitarist Pete Willis was one of them, according to Savage. “We all drank back then to celebrate after the shows,” he says. “But [guitarist] Steve [Clark] and especially Pete were starting to be overly influenced by wanting to get drunk all the time. That was what worried us.”

Elliott adds that the beginning of the end with Willis came during a flight from London to America. “By the time we landed, he couldn’t walk,” the vocalist claims. “Throughout the tour, he got worse and worse. We kept threatening him. We gave him 100 last warnings.”

After completing the High ‘n’ Dry World Tour, Willis was forced out in July 1982 and replaced by Phil Collen from the band Girl. With the twin-guitar lineup of Collen and Clark, Def Leppard began its transformation from rock stars to superstars. However, tragedy lay ahead.

On New Year’s Eve 1984, Allen’s left arm was severed when his Corvette swerved off a highway in Sheffield and he was thrown from the vehicle. After recovering, he relearned how to play drums using his left foot to trigger samples. And in January 1991, Clark — who was on a six-month hiatus from the band — died from a mixture of alcohol and prescription drugs. He was replaced by Vivian Campbell (Dio, Whitesnake) in April 1992.

Four decades have passed since On Through the Night arrived, but Elliott says the lessons he and Savage have learned during that time are invaluable. “As kids, we were absolute dreamers,” he says. “Our path to success was very different than we thought it would be. But everything we learned in those formative years gave us the fuel to be here now and still be making music, which is all I ever wanted to do.”