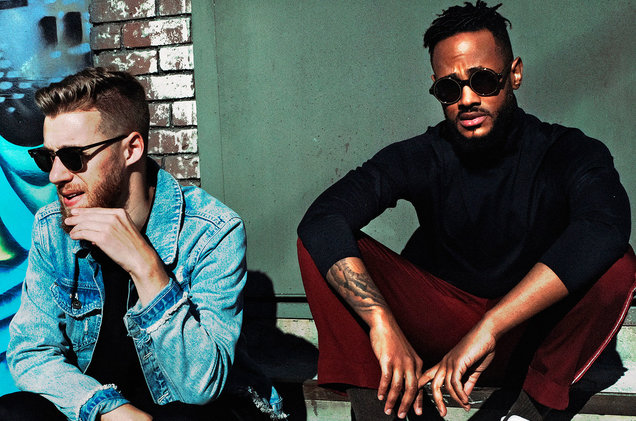 Forming a group was something Aaron “Aalias” Kleinstub and Corey Latif had to do “out of necessity,” according to the latter. Now the duo, as Lo Boii, is gearing up for the release of its first EP Sex Doesn’t Sell…Anymore, whose track “Sweeter” is premiering exclusively below.

Introduced by mutual friends in New York, Aalias and Latif (nee Williams) have been working together for nearly seven years. Latif is a Grammy Award-nominated artist himself, while both he and Aalias previously scored hits for Eminem and Rihanna, Usher, Bebe Rexha, Ro James and others. Sensing they were kindred spirits, Latif tells Billboard, “We got to a place in our careers where we just wanted to express ourselves and create a platform that we can control and come together and make some incredible music.”

Aalias adds that Lo Boii — the name’s a nod to some of the duo’s new wave influences and a vocal range Latif hadn’t explored before — also came out of a sense of “frustration” with their roles in the music business. “I felt the need to express something for myself,” he explains. “I’m grateful for the artists I worked with, but I needed something for myself — for ourselves, really. We both felt the same way, and we really liked what we could do together.”

Lo Boii has already dropped one single, “Floor Seats,” while “Sweeter” is what Latif calls “this marriage of R&B with electronic music” that nods to another of the duo’s shared influences. “One of our biggest inspirations is Tears For Fears,” Latif says. “They just had this incredible bounce in their music and we just wanted to incorporate that Tears For Fears type of swing. It was basically a song that wrote itself — really with this whole project these songs all pretty much wrote themselves. We just tried not to get in the way of the process and just have the inspiration to write. We’d start something and look up maybe an hour later and you have a whole song. You can’t go wrong with that.”

Lo Boii’s EP, which includes a cover of Fine Young Cannibals’ “She Drives Me Crazy,” is due out later this year, and the duo hopes to start touring as well. There are more songs in progress as well, and Latif predicts Lo Boii will follow a course of release small batches of music more frequently than regular album cycles. “We want to keep things short, follow the example of, like, Kanye, with seven or eight songs at a time,” Latif explains. “We felt like that’s a good little bit of a record for people to digest. People’s time spans are so short anymore, we don’t want to give them too much, too soon, especially since we’re a new act despite our experience.” And while Lo Boii is a priority for both, Aalias and Latif plan to keep making themselves available to contribute to other artists.

“Doing music is just a love, a passion,” Latif says. “A lot of times these artists are fans of our art, so we won’t deny them the vibe. We’ll always write and produce for other people — but now we have options, we have a platform on our own. We won’t have to sit on records for artists who don’t see the vision. We’ll just do it ourselves. It’s a great outlet to have.”