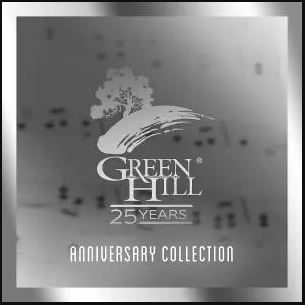 When Green Hill Music first launched, it was as a small division of a gospel music record label founded by Bill Gaither. Now, 25 years later, Green Hill has grown into a global music phenomenon – with a diverse product catalogue that includes music legends as well as artists that are currently sweeping the music scene around the world, millions of daily streams, and songs appearing in top films, television shows, and international ad campaigns.

On June 5th, Green Hill will celebrate a quarter century of delivering the best cross-genre catalogue of music to fans by launching a 25th Anniversary playlist across all streaming platforms. The playlist will allow fans to explore the best of Green Hill Music’s releases in chronological order.

Green Hill Music started in 1994 as part of Gaither’s Chapel Music label (which was to later become Spring Hill Music Group). Green Hill kicked off as a gift market division of Chapel Music with the goal of producing, marketing, and selling music designed for independent gift shops to play and sell in their stores.

Green Hill’s Vice President and General Manager, Greg Howard, had a unique vision: create a label for high-quality offerings that diverged from the usual poorly-packaged and often exclusively Christian-leaning catalogue that were featured by most gift shops. Over the years to come, he brought his goal to fruition – making Green Hill a leader not just in the gift market, but in the non-traditional music market as a whole.

The label kicked off by offering instrumental titles such as Classic Movie Love Songs by David Hamilton, Country Mountain Classics by David Hamilton, Early American Christmas by John Mock, and more. Green Hill’s catalogue soon expanded to include genres such as instrumental piano, guitar, and light jazz music, as well as Classical, Dixieland, Big Band, Easy Listening, Celtic, World, and Smooth Jazz, as well as vocal titles including releases by artists such as Frank Sinatra, Elvis Presley, Dolly Parton, and many more. Guided by Howard and the Green Hill team from concept creation and song selection all the way through to the finished product, each album features thematic artwork and a singular look and sound that’s unique to the Green Hill brand of music.

Green Hill’s expansion has been through more than just artists and music genres; the label also increased the number of locations offering its physical CDs (including Hallmark stores, major theme parks including Disney World, Dollywood, the Biltmore House, the Smithsonian, American Greetings stores, and more). Through a distribution partnership with EMI, its catalogue is also available digitally, enjoying millions of daily streams. In addition, Green Hill’s music has been used in a variety of film and advertising campaigns; it can be heard in movies such as To Rome with Love and The Meddler , TV shows such as Boardwalk Empire , Dallas , Nip/Tuck , and It’s Always Sunny in Philadelphia , and in ad campaigns for Pizza Hut, KFC, and more.

2019 saw Spring Hill Music (Green Hill’s then-parent company) being purchased by full-service entertainment powerhouse Primary Wave Music. The partnership between Green Hill and Primary Wave enabled the acquisition of the masters and publishing catalogues of piano sensation Jim Brickman (with other partnerships and acquisitions to come).

A quarter century after its inception, Green Hill Music has truly blossomed from its humble roots. With a growing artist roster and music catalogue and a loyal fanbase around the world, Green Hill moves into the next 25 years with a renewed commitment to its reputation for quality recordings, as well as its signature sound and style.