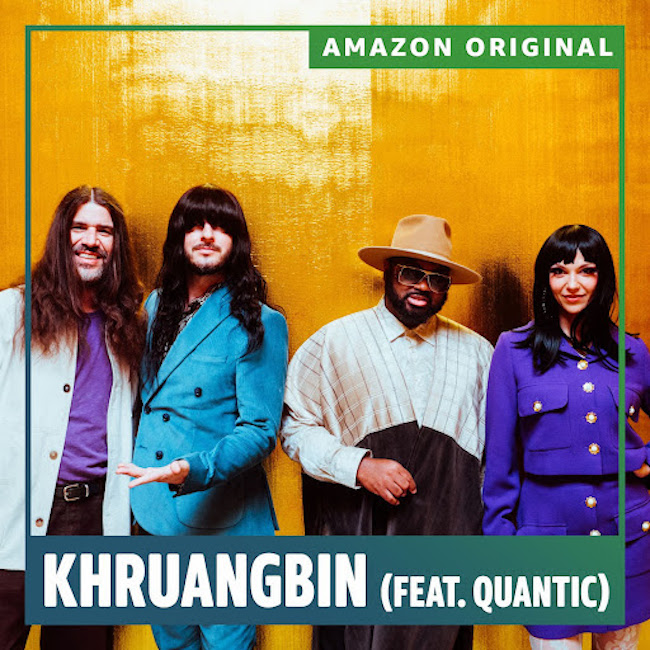 “Green Onions” reached #33 on the pop chart the month of its release and was ground-breakingly influential to many acts of the era.  It’s been featured in a number of movies and television shows like Twin Peaks, The Sandlot, Happy Gilmore, the Sopranos, American Graffiti and more and Khruangbin and Quantic’s smooth rendition breathes new life into the track with fresh production, lush soundscapes and even funkier basslines.

“A very nice rendition of the song,” Booker T. & the M.G.’s guitarist Steve Cropper says. “I really like the modern touch with the rhythm.”

Khruangbin is currently amidst their largest tour to date, The Space Walk Tour, which has seen the band play two sold out nights at Red Rocks, two sold out debut performances at NYC’s Radio City Music Hall, an iconic Glastonbury performance with fellow Texan Leon Bridges, a sold out show at London’s Alexandra Palace and more. Pitchfork says their massive tour is “one of the most anticipated of the summer” and the band will join The Roots, Haim, The Flaming Lips and more for “The Big Climate Thing” festival at New York City’s Forest Hills Stadium in September.

Recently, Khruangbin joined Leon Bridges for their second collaborative EP together, the sultry, chart-topping Texas Moon, which garnered widespread critical acclaim from The New York Times, NPR, Uproxx (“celestial, otherworldly and incredibly psychedelic…”), Vulture, FADER (“could easily sit next to Al Green’s ‘Let’s Stay Together,’ Barry White’s ‘Can’t Get Enough of Your Love Baby,’ and Marvin Gaye’s ‘Sexual Healing”and more…”) and more. Upon release, the music debuted at #4 on Billboard’s Top R&B Albums Charts, landed in the Top 25 of the Billboard Top 200, as well as the Top 5 on Billboard’s Album Sales, Vinyl, Alternative Albums and Rock Albums charts. NPR Music included lead single “B-Side” in their “36 Favorite Songs of 2022” round-up and calls the track a “groove straight out of acid Western.” Texas Moon is out now on Dead Oceans, in partnership with Columbia Records and Night Time Stories Ltd.

Fans can hear Khruangbin cover of “Green Onions” on the The High End playlist or by simply asking “Alexa, play the Amazon Original from Khruangbin” in the Amazon Music app for iOS and Android, and on Alexa-enabled devices. In addition to the new track, Amazon Music listeners can access hundreds of Amazon Originals, featuring both emerging and established artists across numerous genres, available to stream and purchase only on Amazon Music.

Check out the Press coverage of this cover: