Boy George believes he has lost hundreds of millions in royalty fees over the decades and wants to stop the bleeding.

The gender-bending pop star and the band he fronted, Culture Club, are linking up with independent music publishing firm Primary Wave to recoup the rights — and future profits — to hit songs like “Karma Chameleon” and “Do You Really Want to Hurt Me?” The Post has learned.

In a deal to be announced Wednesday, Primary Wave will announce an undisclosed stake in Culture Club’s limited rights to its music in exchange for marketing the award-winning band’s songs — and attempting to win back its remaining copyrights.

Music publisher BMG, which owns the band’s publishing rights, would be one target, sources said.

Primary Wave has a history of success in this area after helping Steve Cropper, who cowrote such hits as “In the Midnight Hour” with Wilson Pickett and “(Sittin’ On) The Dock of the Bay” with Otis Redding, recoup ownership of his music publishing catalog in 2016.

“I think if he had been looked after perfectly — meaning he owned everything — then George’s empire would be $200 to $300 million dollars,” said Boy George’s manager Paul Kemsley. “His catalog today is worth a fortune.”

The New York company already controls rights to more than 16,000 songs from the catalogs of musicians including Bob Marley, Smokey Robinson, Kurt Cobain, Aerosmith and Sly and the Family Stone — and recently inked a deal with the estate of Whitney Houston.

Plans for Houston include a touring hologram, a possible Broadway musical, branding deals and an album of unreleased songs.

Prior deals shepherded by Primary Wave have include the development of a Cobain-branded sneaker for Converse and a Robinson-branded watch deal with Shinola.

“We focus almost exclusively on branding and marketing,” Primary Wave founder and Chief Executive Officer Lawrence Mestel said, adding that most music publishers take a “passive approach of buying catalogs without having a plan.”

“The whole idea is for us to help the artists and the brands by introducing those songs to a new youth culture, not just collect those royalties,” Mestel added.

Mestel was light on details when it comes to finding creative, new ways to market hits such as “I’ll Tumble 4 Ya,” but added that he’d like to do “something visual” and a “live destination event” with the band.

The new deal comes at an opportune time as Culture Club and Boy George plan to go on a tour in 2020. Additionally, MGM is making a film on Boy George, whose androgynous looks and soulful voice captivated the ‘80s.

“My songs are very precious to me,” Boy George told The Post. “They are the story of my life. I wanted to partner with Primary Wave as they respect the legacy but also understand I want the songs heard.”

“Let’s be honest, he’s just f—ing cool, he was very, very original and ahead of his time,” his manager Kemsley said. “He’s more than just a singer, he’s an icon. He’s a trailblazer. I’m expecting big things.” 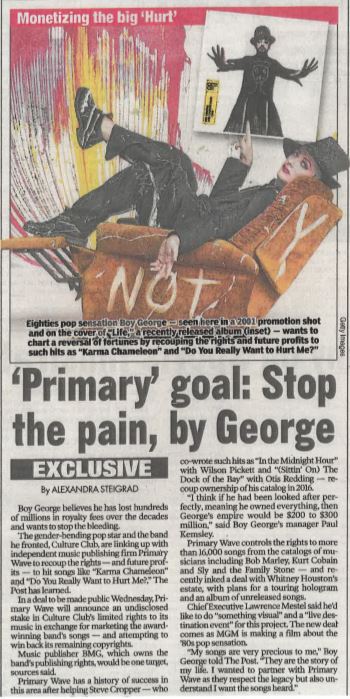