(Los Angeles, CA- December xx 2022) Today This Machine (a part of Sony Pictures Television) announced a deal to make the make the definitive documentary about Dame Olivia Newton-John, the iconic and beloved entertainer, best-selling music artist, animal rights and environmental activist and health, wellness and plant medicine advocate who passed away in August 2022.  The film, which will have access to her music and personal archives, will be produced by R.J. Cutler, Elise Pearlstein and Trevor Smith of This Machine and executive produced by John Easterling, Larry Mestel (Primary Wave Music), Natalia Nastaskin (Primary Wave Music), John Mason and Mark Hartley. This Machine is behind the Academy Award shortlisted Billie Eilish: The World’s A Little Blurry and the upcoming Goodbye Yellow Brick Road: The Final Elton John Performances And the Years That Made His Legend for Disney+

With a career spanning over six decades with more than 100 million albums sold, Dame Olivia Newton-John’s successes include: four Grammy Awards, an Emmy Award, numerous Country Music, American Music, Billboard and People’s Choice Awards, ten #1 hits, more than 15 top 10 singles, a star on the Hollywood Walk of Fame and over 32 albums released. In 1978, her co-starring role with John Travolta in Grease catapulted Olivia into super-stardom, earned her a Golden Globe nomination and, to date the film remains one of the most successful movie musicals of all time.  Her other feature film credits include Funny Things Happen Down Under, Toomorrow, Xanadu, Two of A Kind, It’s My Party, Sordid Lives, Score: A Hockey Musical, and A Few Best Men. As one of the world’s most beloved musical artists, Billboard Magazine ranks Olivia at #7 of “Greatest of All Time Hot 100 Female Artists,” and at #44 as one Billboard’s “Greatest Music Acts of All-Time.”  Her hit “Physical” was also named the “Sexiest Song of All-Time” by Billboard. Newton-John is also a New York Times best-selling author with her memoir, Don’t Stop Believin’.

In 1992, Olivia was diagnosed with breast cancer which led her to announce her partnership with the Austin Health and the creation of the Olivia Newton-John Cancer, Wellness & Research Centre (ONJCWRC) in her hometown of Melbourne, Australia.  In November 2020, Olivia and her husband, John Easterling, established the Olivia Newton-John Foundation Fund, an independent charity sponsoring global research into plant medicine for cancer with a specific emphasis on cannabis. These investments in new scientific research will educate patients and their caregivers about kinder options for treating cancer and improving the quality of life for cancer patients. The Foundation is committed to realizing Olivia’s dream – a world beyond cancer. 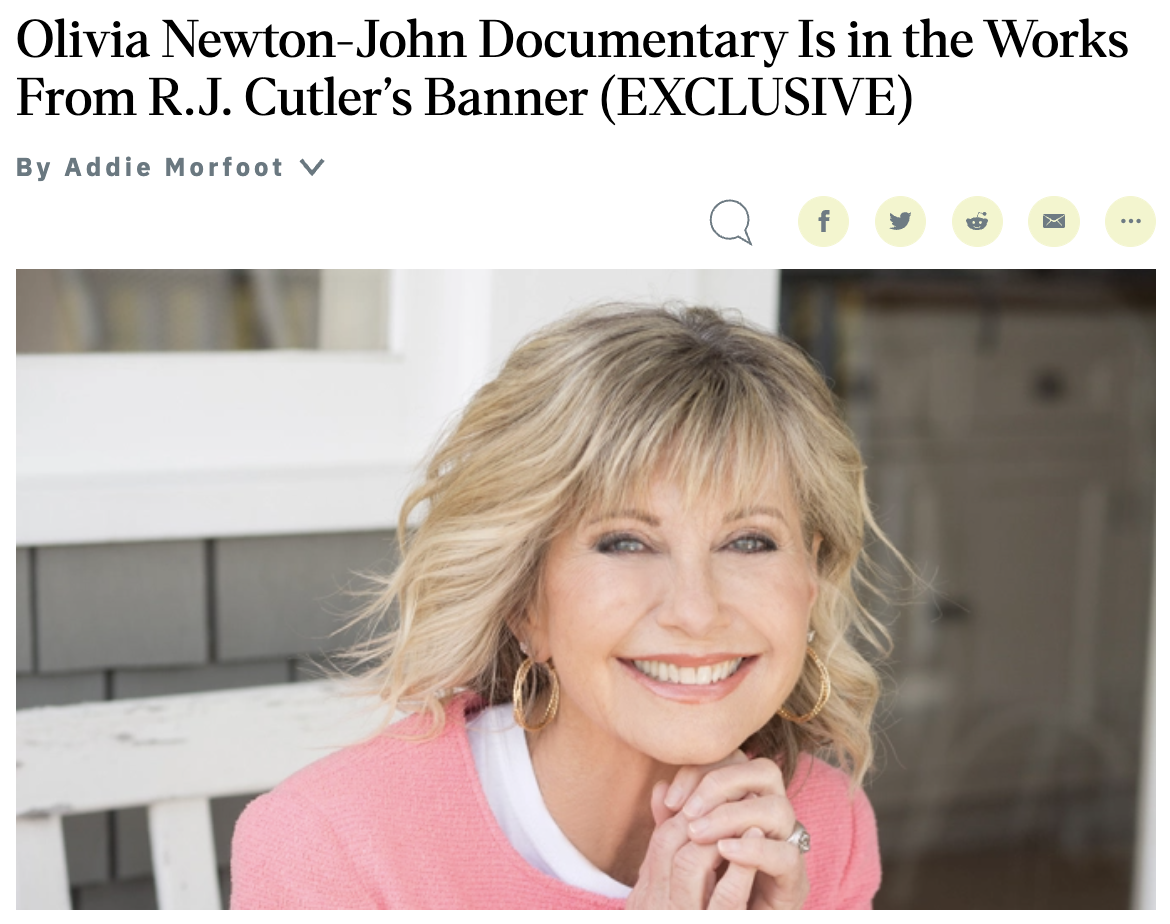 This Machine was founded in Los Angeles and New York City in 2020. Headed by Award-winning filmmaker and non-fiction pioneer R.J. Cutler, This Machine explores the times in which we live through non-fiction storytelling in all media. This Machine’s team includes Oscar-nominated, Emmy-winning producer and executive Elise Pearlstein, Cutler’s long-time producing partner Trevor Smith and development team of Margaret Yen and Sally Rosen Phillips.

The company is behind the Academy Award shortlisted Billie Eilish: The World’s a Little Blurry, the multi-award winning BELUSHI, the critically acclaimed docuseries “Dear…”  which recently aired its second season on Apple TV+ and the recently released “Supreme Models”(Black Voices Fund/Youtube Originals) a series that pays tribute to the Black women who broke down barriers and transformed the fashion and beauty industries.  Next up for This Machine is“Murf the Surf: Jewels, Jesus, and Mayhem in the USA”, a true-crime four part docuseries debuting on MGM+ on January 15, 2023 that pulls back the curtain on America’s most infamous jewel thief, Jack Roland Murphy.  Other upcoming projects include feature documentaries Goodbye Yellow Brick Road: The Final Elton John Performances And the Years That Made His Legend (Disney+), the Untitled Martha Stewart Documentary (Netflix), The Devil You Know(HBO), which is inspired by New York Times columnist Charles Blow’s bestselling book and upcoming multi-part documentary series include “Big Vape” (Netflix), which chronicles the rise and fall the of E-cigarette company Juul.  In addition, the company has other yet to be announced projects for Amazon, Showtime, and CNN.  This Machine’s team has decades of experience creating the highest quality and most popular non-fiction films and series as well as scripted series, feature films, and podcasts.