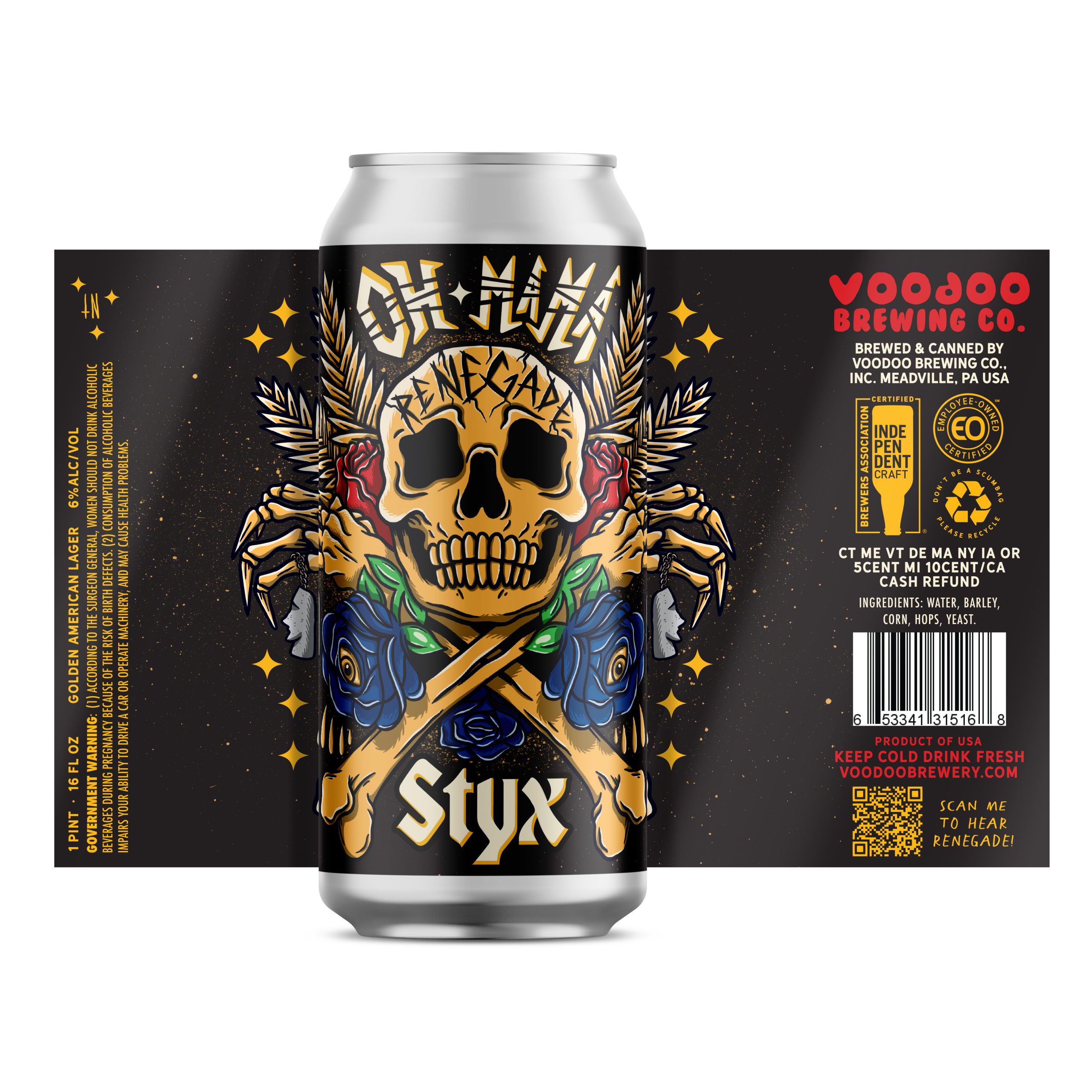 The smash-hit by legendary and multi-Platinum rockers STYX has become the adopted theme song of the Pittsburgh Steelers that’s heard during the third quarter at every home game as part of a video compilation of defensive plays. It helps to boost the energy of both players and fans. As soon as those renowned opening words are sung, “Oh Mama…,” the crowd knows what’s coming and is instantly exhilarated.

Now, that connection between STYX and Steeler Nation gets even more solidified, as they team up with Voodoo Brewing Co. to bring fans their latest creation, Oh Mama, a Traditional Golden American Lager especially brewed for their fans in the Steel City.

Sold as a four-pack of 16 oz. cans or as 50 liter kegs, Oh Mama is currently available at Voodoo’s corporate pubs and franchised locations, online for Pennsylvania and Washington, D.C home delivery, Tavour via their app (using the code “renegade”) for other states throughout the U.S., and in the greater Erie, PA (Allegheny Beverage) and Pittsburgh, PA (Vecenie’s) areas. Folks can be on the lookout for it at their favorite watering hole or grocery store (including Giant Eagle where it’s already available) and they can request it at a bar near them.

We are excited to announce that STYX, in partnership with Voodoo Brewing Co., is bringing our Oh Mama beer to a frosty mug near you.

We think you’re gonna love it as much as we do. Cheers!!!”

“As we have our tradition with ‘Renegade’ and the Steelers, we are excited to announce our Oh Mama beer. We look forward to bringing a part of Steeler tradition to our fans that they can enjoy from home.”

Inspiration for the beer’s name and artwork comes from one of the band’s signature hits, “Renegade,” which is regularly played at Heinz Field as an adopted theme song for the Pittsburgh Steelers defense. The band has also sung the national anthem and performed “Renegade” at many Steelers games in recent years.

The love for “Renegade” at all Steelers games started at a playoff game against the Cleveland Browns on January 5, 2002. The Steelers were down 24-7 well into the third quarter. During a commercial break, a crew member at Heinz Field (home of the Steelers) decided to play “Renegade” in an effort to get the fans riled up and boost the momentum of the team. It was a moment that helped the team come back to win the game 36-33 and subsequently change Steelers history.

“Voodoo Brewing Co. has always had a strong connection to music, not only playing it for our beers as they ferment, but also in most of the beer brands we’ve created and our good vibes Beer Festival,” says Voodoo CEO Matteo Rachocki. “When approached by Tommy and his team about a beer, we jumped at the opportunity to collaborate on something authentic to Pittsburgh, while also paying homage to a legendary rock band! We couldn’t be happier with the result, and we’re stoked to share this amazing product, not only on a national scale, but specifically through our local Pittsburgh market and our mutual connection with the city and its sports teams.”

STYX released their 17th album, CRASH OF THE CROWN, on the band’s label, Alpha Dog 2T/UMe, which is available as clear vinyl, black vinyl, CD, and on digital platforms and at Styxworld.com. It debuted on Billboard’s “Rock Albums” chart at #1 its first week out.

CRASH OF THE CROWN is the follow-up to STYX’s 16th studio album, THE MISSION (their first in 14 years at the time, which critics called “a masterpiece”) which was released June 16, 2017 on the band’s label, Alpha Dog 2T/UMe. The highly anticipated two-disc reissue of THE MISSION was released on July 27, 2018 via Alpha Dog 2T/UMe, which includes a CD of the original album, as well as a Blu-ray of the album mixed in 5.1 surround sound accompanied by stunning visualizations for each of the album’s 14 songs based on the album artwork. It originally debuted on various Billboard charts, including: #6 Top Rock Albums, #11 Physical Albums, #11 Vinyl Albums, #13 Current Albums, #14 Billboard Top Albums, #16 Retail, #17 Mass Merch/Non-Traditional, #29 Digital Albums, and #45 Billboard 200 (includes catalog and streaming).