Whitney Houston breaks yet another record. Just one month after announcing a debut NFT with the green music NFT platform, OneOf, Primary Wave Music is excited to announce the Whitney Houston Collection auction closed and broke the record for the highest-selling NFT on the Tezos blockchain at $999,999 USD. This record-breaking moment in music and NFT history is also the first time an estate sold an unheard and unreleased recording as an NFT, which was uncovered by the Primary Wave and Estate teams last year.

“This initial NFT drop is one of many Whitney Houston collections as we continue to tell her story, going behind the scenes and using never-before-seen content from the estate’s archives to celebrate her career, music, and talent in new and creative ways” says Robert Dippold, Partner & President of Digital Strategy for Primary Wave Music. He continues, “We look at blockchain technology and the NFT marketplace as a great medium to present and engage with fans in a more meaningful and profound level to showcase and heighten ‘moments’ in an artist’s career and thus allowing content to continue to be distributed (and protected) amongst fans.”

Pat Houston, President and CEO of The Estate of Whitney E. Houston, adds “Being able to work with someone as young as Diana, she’s 17 years old. Whitney was 17 years old when she recorded the song. Both come from Newark, both have the same middle name. Whitney had the desire to always help others help themselves, especially young people. She established the Whitney Houston Foundation in 1989 and she had events each year centered around young people, so it was a no-brainer when we were introduced to Diana. Timing is everything and it was the right moment. We want to continue Whitney’s legacy, and this is a new art form for her music to be displayed. What better way than to do it with Diana and through the NFT.” To hear more from Pat and her conversation with Diana Sinclair at Art Basel, please click HERE.

The collection features an early, never-before-heard, full-length song demo that Houston recorded at just 17 years old. The winner of this auction will now have personal access to this recording in their OneOf Vault along with a digital video created by breakout 17-year-old artist Diana Sinclair.

The first drop in the collection – “Whitney’s Prom” NFT – was launched earlier this month and sold out in less than a minute. All 300 “Whitney’s Prom” GOLD tier NFT’s also sold out in record-breaking time. In total, the full collection, which features rare images and videos, has generated $1.1 million in sales thus far.

Primary Wave Music’s Whitney Houston Collection was created to support and empower young creators, just as Whitney did. With that, a portion of the proceeds of the auction will go directly to the Whitney E. Houston Foundation. 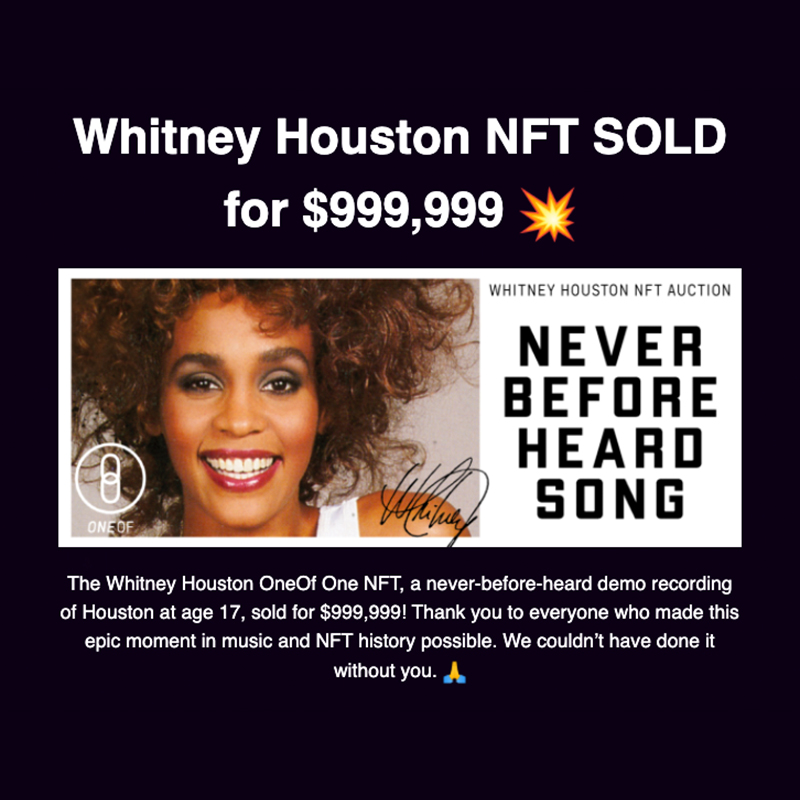