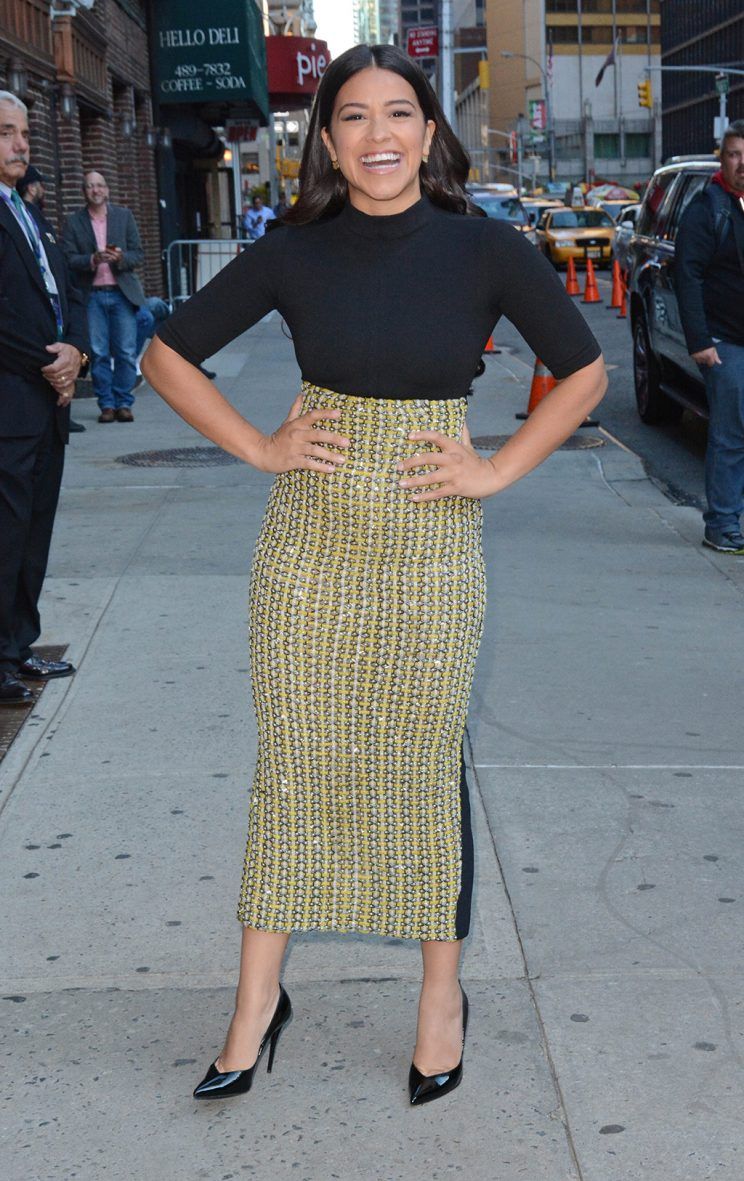 Gina Rodriguez has teamed up with Google’s Made With Code to honor young women with an awards show called the Young Women’s Honors. The evening, which will air on the CW on Dec. 19, will pay tribute to female millennials who are breaking down barriers and doing their part to change the world. Among them is Simone Biles, the 19-year-old Olympian who recently became the most decorated U.S. gymnast of all time. The evening also features Michelle Obama, Katie Holmes, Laverne Cox, Jenna Dewan Tatum, and Victoria Justice.

Yahoo Style caught up with the ambitious 32-year-old to discuss her excitement over the awards show, how she feels about Jane’s finally losing her virginity, and why she would never be caught dead dressing like her television persona.

Yahoo Style: You created, executive-produced, and hosted this new awards show. How did this all come about?
Gina Rodriguez: I am one of three girls. I grew up in a household of women, and I knew how incredible it was to have role models that came before me, to pave the road for facing your fears and going after something you wanted and be unafraid of failure or rejection. And I do understand how blessed I was. I’m extremely fortunate to have those women in my life. Not everybody has that opportunity, and not everybody is born into a household in that way. So I wanted to use the beautiful blessings I’ve had from Jane the Virgin and create something with a platform that could highlight women doing incredible work in all different fields.

Do you feel that the message behind this award show is even more important now that Donald Trump, who has been accused of sexual misconduct by many women, is the president-elect?
I think in our day and age, where women have been kind of under attack in the past year during the campaign, there is a lot of fear surrounding what is going to be accessible for women. I think now more than ever is a beautiful time to start highlighting what women are doing and the incredible work that women are doing everywhere — in coding, in education, in philanthropy, in sports. It’s just so needed, especially in a social media era where things that we highlight are to me unfortunately not that progressive. We put a lot of emphasis on physicality and beauty and what can make us beautiful, but we never talk about what you need to make yourself better, what kind of version of yourself do you want to see in this world, what kind of impact do you want to make? And we really wanted to do that.

You had Michelle Obama speak via a pre-taped message at the show, and you’ve mentioned that the first lady is a big role model of yours. What do you find so inspiring about her?
Oh my God. She’s incredible. All the work that she does, the way that she carries herself; she is a vision of poise and grace. I think that she is the vision of empathy, and she just really stands for what she believes in, really walks the walk. I’ve been able to meet her multiple times. I worked with her with Latin Girls Learn, and I think that everything she is doing, all her beliefs, they really do create change. And I think when somebody follows their dreams, it allows others to do the same. She is the ultimate in following her dreams, the ultimate in creating change and being unafraid of anything standing in her way.

How on earth did you balance 15-hour filming days on the Jane the Virgin set, spending time with family and friends, hanging with your boyfriend, and producing-creating-hosting this show?
I don’t to be honest. [Laughs] I’m really learning balance or struggling with it, depending on how you view it. I am trying my best. Every day I learn a little bit more about self-care and what I need in order to make sure I can continue to do the things that I love. It is definitely a balancing act. It is something that I haven’t quite mastered. And I will sacrifice things at times I maybe wish I hadn’t, whether it be time with my family or my loved ones. But I’m learning. Trial and error. Haven’t quite fully figured it out, and I don’t know if I ever will, but I’m going to always be trying.

How excited are you that your character on Jane the Virgin finally got to lose her virginity? Was it a bittersweet moment for you?
I really wanted Jane to do it in the way she had maybe envisioned it when she was a child — the man that she loved and the man that she married. So I was so happy that that’s the way it ended playing out. I was somewhat relieved because then we got to enter all these other storylines. We get to talk about what it is to go into your sexuality as a woman. And for Jane, having already had a child, even though it was silly circumstances, it was awesome that the virginity scenes were not as preachy and they are not perfect. They went through a few times to actually figure out how their bodies molded together, and they’ll obviously continue to do that in the course of their marriage.

It’s really nice opening it up to other storylines. The show isn’t about her virginity. The show is about this girl going through life, and that just happens to be a really fun aspect of what made it interesting and a little different, and it made her holding on to her convictions such a powerful thing as a woman on television. So it’s nice that she also then moved into another chapter. I was desiring that myself for Jane.

You played that version of the character for so long. Are there times on set where you have to remind yourself, “Oh, wait! I’m not a virgin anymore?”
Yeah. So many people come up to me and say, “The virgin!” But I feel like now they start to say that and then they are like, “Oh, wait. You’re not anymore!” I’m like, “Yep. That did change.” It’s interesting because I always lace in the fact that she was very much still a sexual human being. She very much still had desires and wants. So her finally losing her virginity wasn’t like she all of a sudden learned how to give a blowjob. She had already walked the path of a girl that definitely played with temptation. I think that is very real, instead of it being so black and white.