*Audio also managed in Spotify App
We’re thrilled to announce our strategic partnerships with Brookfield Asset Management and CAA!
“It means there isn’t any good acquisition that we couldn’t do in the music business. We’re not limited by size or opportunity.” – Larry Mestel
Read the full Press Release below.
Read more HERE on The Wall Street Journal. 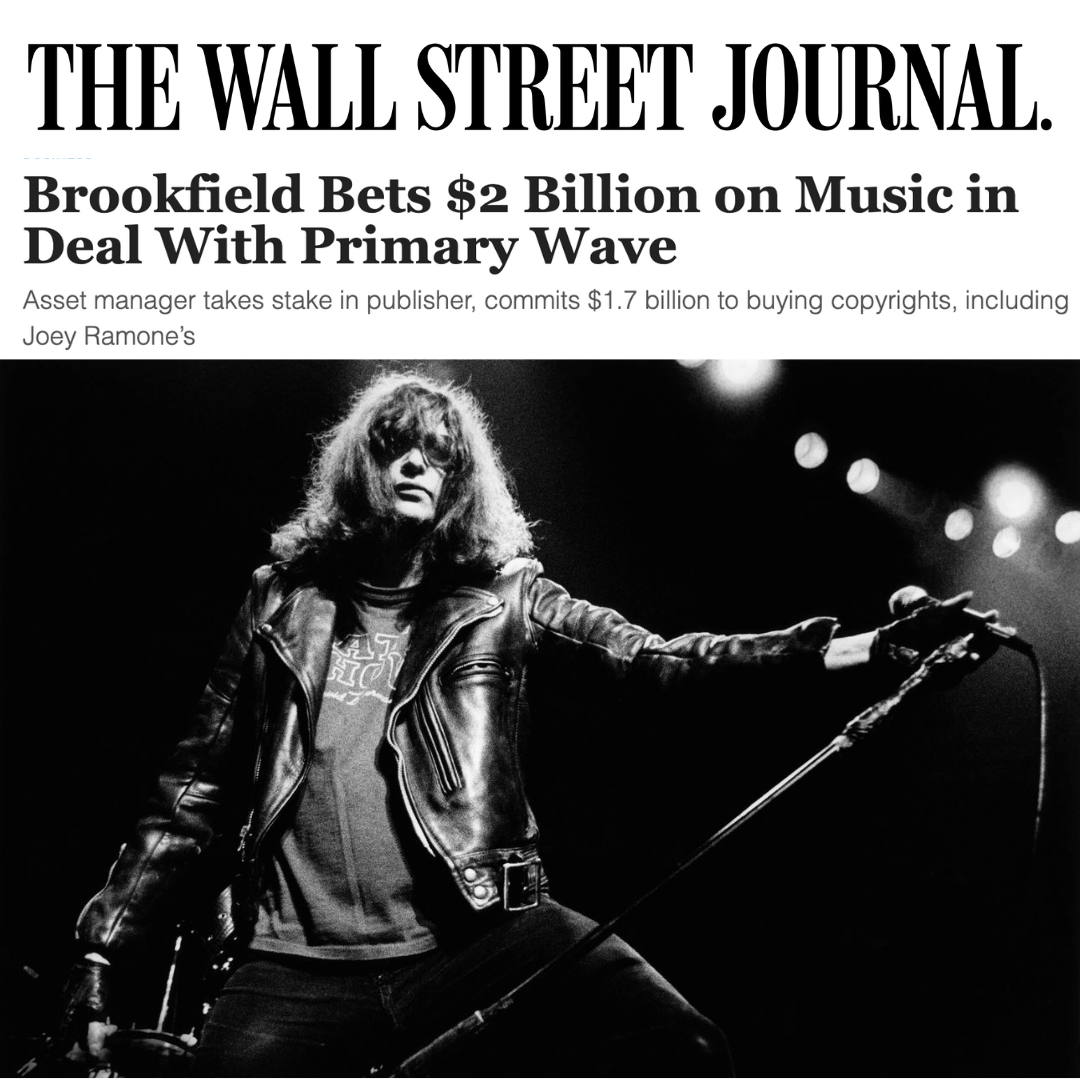 Commitment of $1.7 Billion From Brookfield

The World’s Most Iconic Musicians

NEW YORK, NY (October 6, 2022) – Primary Wave Music and Brookfield Asset Management Inc. (“Brookfield”) today announced a strategic partnership whereby Brookfield will buy a significant minority interest in Primary Wave and provide an additional $1.7 billion capital funding commitment, in a deal valued in excess of $2 billion. An initial acquisition of over $700 million of iconic music rights from the company’s fund 1 and fund 2 will go into Primary Wave’s new permanent vehicle. With over $300 million worth of deals previously finalized year-to-date and another $600 million of pending transactions expected to be completed by year-end, Primary Wave – the leading publisher of iconic and legendary music in the world – continues to dominate the independent publishing space as a partner of choice. It was also announced today that leading entertainment and sports agency, Creative Artists Agency (CAA), will become a strategic partner and minority shareholder in Primary Wave. Brookfield and CAA, with the continued involvement of funds managed by Oaktree Capital Management, L.P. (“Oaktree”), will provide unique financial, creative, and global relationships to the music powerhouse.

Primary Wave’s management team will continue to control the company and will invest a majority of the Brookfield funds into the permanent capital vehicle through continued acquisition of music IP, creating a long-term vehicle holding company to leverage its extensive marketing, branding, digital strategy, and content creation teams to partner with artists. Primary Wave’s catalog of music already consists of over 800 Top-10 singles, more than 400 #1 hits, and some of the most legendary names in music, including Prince, Bob Marley, Whitney Houston, James Brown, Stevie Nicks, Ray Charles, Smokey Robinson, Bing Crosby, Def Leppard, Boston, Burt Bacharach, Olivia Newton-John, and Sun Records, among many others. The new funding from Brookfield, as well as their assistance on future growth initiatives and transaction structuring, will strengthen Primary Wave’s financial positioning as brand manager of legendary and iconic songs.

Primary Wave has several projects nearing completion, including the Whitney Houston biopic I Wanna Dance With Somebody; the James Brown A&E docu-series Say It Loud; the recently announced Melissa Etheridge off-Broadway production; the expansion of the Sun Diner; as well as the Sun Records podcast Midnight at the Sun Diner, and more.

“We are thrilled to deliver a comprehensive capital solution to Larry and the team at Primary Wave to support their continued acquisition of the world’s most iconic music IP,” said Angelo Rufino, Managing Partner, Brookfield. “Strong secular growth trends, scarcity value of assets and the continued penetration of music in new forms of content delivery underpin this significant commitment to the asset class.”

“Brookfield is among the most intelligent and well financed deal-makers in the world,” says Larry Mestel, CEO & Founder of Primary Wave Music. “What separates them from every other financially oriented investor of their size is their creativity, long-term horizon and ability to help scale unique businesses with operational expertise in addition to capital.  The addition of the CAA team to the Primary Wave family provides the artistic, creative, relationship and content-creation clout unheard of in the music publishing space.”

Oaktree is a leader among global investment managers specializing in alternative investments,
with $159 billion in assets under management as of June 30, 2022. The firm emphasizes an opportunistic, value-oriented, and risk-controlled approach to investments in credit, private equity, real assets, and listed equities. The firm has over 1,000 employees and offices in 20 cities worldwide. For additional information, please visit Oaktree’s website at http://www.oaktreecapital.com/.