Styx, Rush and Run the Jewels are just some of the artists putting their names on new brews 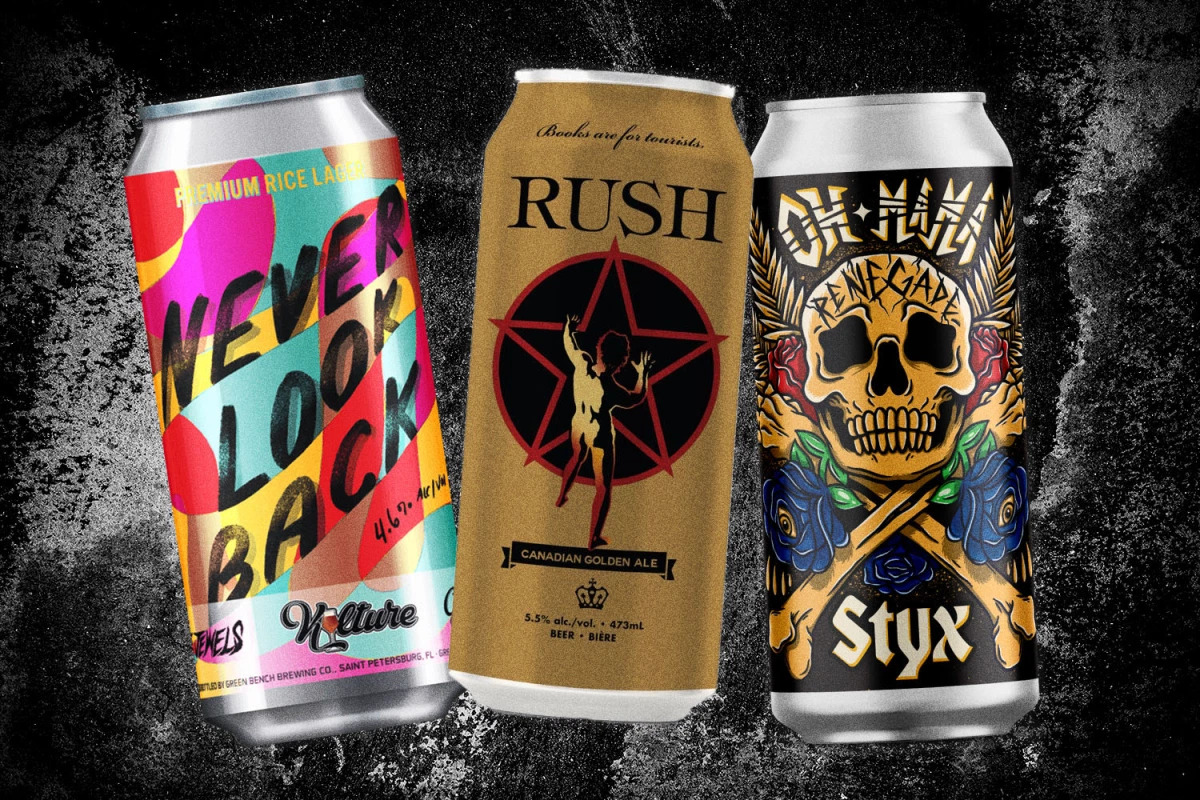 What’s kind of like a ham sandwich without the bread or the ham, comes in a can and you can drink it? A new beer from the band Rush, according to a tongue-in-cheek Instagram post by guitarist Alex Lifeson.

Rush recently launched a Canadian golden ale in collaboration with Henderson Brewing Company, a Toronto craft brewer. And they’re not the only ones: classic rock band Styx has a new lager out via Pittsburgh’s Voodoo Brewing Co., and rap duo Run the Jewels is making another foray into beer this fall, building on collaborations that began in 2013 when Goose Island brewed a Run the Jewels Belgian wheat ale in conjunction with that year’s Pitchfork Music Festival in Chicago.

“Our fans really reacted to it,” says Amaechi Uzoigwe, who manages Run the Jewels. “The analogues between the indie beer community and the indie music community are incredibly striking. They’re like kindred spirits in many, many ways.”

Since then, Killer Mike and El-P have teamed with breweries around the world for limited-edition beers in a range of styles, including IPAs, sours and hard seltzer. This fall, after a year-and-a-half of high-profile racial awakenings in America, the duo is spotlighting Black-owned breweries with three limited new offerings: the rice lager Never Look Back, brewed with the diversity- and equity-focused non-profit Beer Kulture at Green Branch Brewing in Florida; the strong ale Never Look Back, brewed with molasses and corn grits in a collaboration with North Carolina’s Proximity Brewing and Spaceway Brewing; and Blockbuster Night, Pt. 1, a terpene-laced IPA produced by Brew Gentlemen Brewery in Pennsylvania. A portion of the proceeds from all three beers will benefit Beer Kulture and other community organizations.

“To us, what it meant was, here’s an opportunity to not just talk the talk, but walk the walk in a small way,” Uzoigwe says. “For Killer Mike, it’s about empowering small business, period. If you want to help Black people, help them that way. These are brewers that we connected with, we really love what they’re about.”

If Run the Jewels has amassed an impressive portfolio of beers over the past eight years, Styx is just testing the waters. “This is a whole new world for us,” says singer Tommy Shaw, whose music publishing company, Primary Wave, set up a joint venture with Voodoo Brewing to make a golden lager called Oh Mama.

Though Styx has roots in Chicago, and Shaw lives in Nashville these days, there’s a certain logic to teaming up with a Pittsburgh brewery for Oh Mama. The beer takes its name from the first words of the band’s 1979 hit “Renegade,” which has become an iconic part of Steelers football games. Since a playoff game in 2002, the song has accompanied a compilation of defensive highlights shown on video screens at Heinz Field in the third quarter, while the crowd sings along.

“It’s this tribal thing there that’s like — it’s just amazing to be a part of all of this from a song that I wrote on the piano in my living room by myself back in 1976,” Shaw says.

That connection with Steelers fans is what prompted Primary Wave to partner with a Pittsburgh brewery, says Jeff Straughn, head of branding for the company. “If you travel around, name any market, there’s Pittsburgh Steelers bars,” Straughn says. “We saw this as a golden opportunity to build on a credible product, not a gimmick product, one that actually would have sustainability and scale.”

A similar sensibility was at work with Rush’s beer. The band’s camp contacted Henderson Brewing in 2017 to express interest in developing a beer, brewery general manager Steve Himel tells InsideHook. After a period of discussion and what Himel calls “due diligence” about the concept, the brewery worked with Lifeson and singer/bassist Geddy Lee to develop the recipe. Rush Golden Ale will be available first in Ontario, though Henderson hopes to line up exports to the U.S. later this fall.

“What intrigued Rush is that they saw a bunch of other people making beers and they were curious what that was all about,” Himel says. “They wanted to make a beer for their fans. You know, Rush fans, for the most part, are, let’s say, slightly more complex than typical rock music fans. And we all felt that there was an opportunity to introduce this type of person to craft beer that maybe they hadn’t had before.”

Bands and beer have intersected before, of course, in a way that goes beyond musicians swilling down suds onstage.  Pop trio Hanson teamed with Oklahoma’s Mustang Brewing in 2012 for an IPA called MmmHops, for one, and Iron Maiden this year marked the eighth anniversary of their Trooper series of beers, produced by England’s Robinsons Brewery. Maiden singer Bruce Dickinson even gave a keynote address at the 2019 Craft Brewers Conference in Denver. Def Leppard and Seattle’s Elysian Brewery in 2018 released Def Leppard Pale. Delaware’s Dogfish Head brewery started making its American Beauty pale ale, inspired by the Grateful Dead, in 2013. There’s more than beer, too: there’s Grateful Dead wine, and country-rocker Zac Brown launched his Z. Alexander Brown wine brand in 2016. The Rolling Stones in 2012 put their name on a limited-edition Japanese whiskey that initially sold for around $300 a bottle.

“There’s a wide array of different products out there,” Straughn says. “But what I think is really important is the novelty has to be balanced with credibility.”

Though connoisseurs and super fans will always prize items like branded high-end whiskey, beer can be a more approachable way for bands to engage with fans, or make new ones, says Kate Brankin, who oversees beverage initiatives for Run the Jewels. (The duo has plans to launch its own beer line, as well as spirits and coffee, as early as next year.)

“It’s a way to have an organic connection with people, to kind of reach beyond the music and actually reach out to someone in a store or meet people where they are at a bar or at a restaurant and have that connection that way,” Brankin says.

It helps when the product has the genuine backing of the person whose name is on it. Though Shaw calls himself “a cheap date” who tends not to drink much, he says he really likes Oh Mama golden lager, and he was pleased that his beer-aficionado neighbors in Nashville did, too. “I felt like a teenager when I was drinking it,” Shaw says, laughing. “It was like, you can chug this beer. And you can’t say that about many of them.”