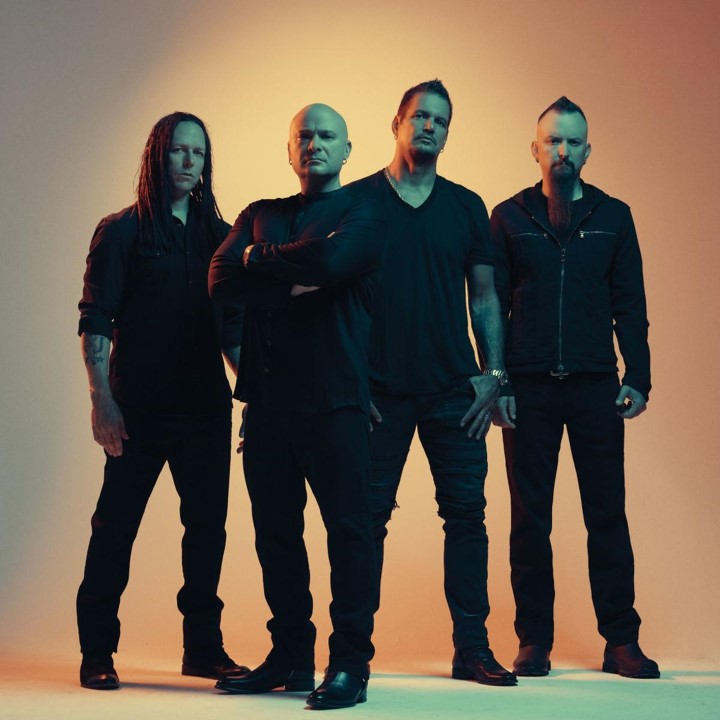 The band has released six studio albums, five of which have consecutively debuted at number one on the Billboard 200. Disturbed went into hiatus in October 2011, during which the band’s members focused on various side projects, and returned in June 2015, releasing their first album in four years, Immortalized, on August 21, 2015. They also recorded and released one live album, Disturbed: Live at Red Rocks on November 18, 2016, which was recorded on August 18, 2016 at Red Rocks Amphitheater in Morrison, Colorado, located about 10 miles west of Denver, Colorado. Their seventh studio album, Evolution, was released on October 19, 2018.

Before David Draiman joined Disturbed, guitarist Dan Donegan, drummer Mike Wengren, and bassist Steve “Fuzz” Kmak were in a band called Brawl with vocalist Erich Awalt. Before changing their name to “Brawl”, however, Donegan mentioned in the band’s DVD, Decade of Disturbed, that the name was originally going to be “Crawl”; they switched it to “Brawl”, due to the name already being used by another band. Awalt left the band shortly after the recording of a demo tape; the other three members advertised for a singer. They posted an advertisement in the local music publication in Chicago, Illinois, called the “Illinois Entertainer”. Draiman answered the advertisement after going to twenty other auditions that month. Guitarist Dan Donegan commented on Draiman: “You know, out of all the singers that we had talked to or auditioned, he was the only singer who was ready to go with originals. And that impressed me, just to attempt that”.

With regard to Draiman being the singer for the band, Donegan said, “After a minute or two, he just starts banging out these melodies that were huge…I’m playing my guitar and I’m grinning from ear to ear, trying not to give it away that I like this guy, you know, because I don’t want to, you know… ‘Yeah, we’ll give you a call back. We’ll, you know, discuss it.’ But I was so psyched. Chill up my spine. I’m like, ‘There is something here.'” As drummer Mike Wengren commented, “We clicked right off the bat.” Draiman then joined the band in 1996 and the band was renamed Disturbed. When asked in an interview why he suggested to name the band “Disturbed,” Draiman said, “It had been a name I have been contemplating for a band for years. It just seems to symbolize everything we were feeling at the time. The level of conformity that people are forced into was disturbing to us and we were just trying to push the envelope and the name just sorta made sense.

Disturbed headlined the 2018 Rock Fest, along with Godsmack and Incubus. The band announced via social media in early January of 2018 that they had entered the studio to begin recording their next studio album. In June 2018 lead guitarist Dan Donegan and bassist John Moyer confirmed with sources that the new album is complete, with 100% of the songs finished it is on to just mixing and mastering. Band members also posted a picture via Instagram together at a dinner party in celebration of completion of the recording process. The band’s first album in over 3 years and the band’s first album in over 8 years to have bassist John Moyer being involved in.

Disturbed’s mascot, named “The Guy”, was originally just a drawing of a face with a large grin, as seen on the back of the album The Sickness. The original drawing of The Guy was then edited using a digital distorting program. After the original image had been distorted three times The Guy became the official mascot for the band. Later, he would be drawn as a full figure by artist David Finch.

Classified as a heavy meta or hard roc band, Disturbed is also regarded by some critics as nu metal and alternative metal. When asked about die-hard heavy metal fans not finding Disturbed heavy enough, Draiman at one time stated:

“We probably have too much melody going on or we’re not quite as turbulent or caustic. While I really love that type of music, it’s not what we try to do. If we have to place things in context, we’re more hard rock than heavy metal these days. The secret is that we were never really part of any particular trend, although we definitely benefited from the popularity of what was called nu metal at the time … We never had the stereotypical attributes that those bands had. We don’t rap; there’s no turntable involved; no fusion in that respect. We play, in my opinion, classic metal. Sabbath, Maiden, Priest, Metallica, Pantera: these are the bands that made us want to play.”

Allmusic reviewer Bradley Torreano described the album Believe as “taking the sort of jump that their heroes in Soundgarden and Pantera made after their respective breakthrough records”. He also described the title track as moving “from a brutal chug to a sweeping chorus that suddenly stops in its tracks and turns into a winding riff that recalls the work of vintage James Hetfield”. Believe is also considered by several critics to be a step away from the nu metal sound featured on The Sickness, moving towards a more hard rock and heavy metal sound that was continued in their following albums.

According to frontman David Draiman on the band home documentary M.O.L., the lyrics that he writes are inspired by actual experiences of his own, and he stated that he likes to present his ideas with cryptic lyrics. These lyrical themes range from the Judeo-Christian concept of Heaven and Hell, domestic abuse, suicide, insanity, relationships, war, to more fantasy-like themes, such as vampirism, werewolves and demons.